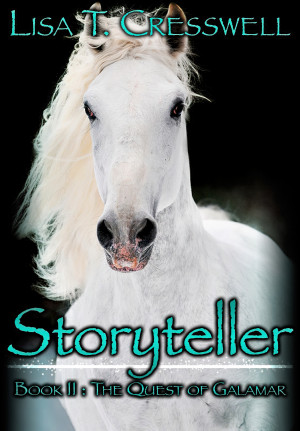 By Lisa Cresswell
Rated 5.00/5 based on 1 review
In this fable for all ages, a young fairy searches for her kidnapped grandmother in a race to save a dying world and fulfill an ancient prophecy. It is the second book in the Storyteller Trilogy. More
The second book in the Storyteller Series, “The Quest of Galamar”, continues the tale of Lily Lightfoot and her friends Peter Everheart and Heather Whipple. Now that they’ve found their way into the True World, the friends must rely on the help of Lord Gabriel, an enchanted elf, now a manticore, to find Lily’s captured grandmother, Gwendolyn.
Gabriel sends the three friends to find the full moon amulet, hidden deep in the mountains and guarded by a fierce dragon. The amulet, one of four moonstones created ages ago by the fabled elf warrior Galamar, holds the power of the Northern Portal keeper, Ironblood the dragon. Whoever possesses all four amulets has the power to recreate or destroy the True World. Gabriel’s brother, Lord Kane, will stop at nothing to have the ancient powers for himself and keep Lily from fulfilling the Prophecy of Galamar.
On their epic journey, Lily learns more about magic, friendship, the power of forgiveness and finding the strength we all possess inside.
Available ebook formats: epub mobi pdf rtf lrf pdb txt html
First 10% Sample: epub mobi (Kindle) lrf more Online Reader
pdb
Price: $2.99 USD
Buy Add to Library Give as a Gift
How gifting works
Create Widget
Tags: love friendship adventure fantasy magic young adult elf fairy fairies elves dragon troll pixies spells unicorn middle grade harpy manticore socercy
About Lisa Cresswell

Book II: The Quest of Galamar
How far would you go?

Reviews of The Quest of Galamar by Lisa Cresswell

Turning out to be quite a fairy tale.

The Quest of Galamar picks up where Storyteller left off. Lily, Peter and Heather are now trapped in the True World, a place torn by the onslaught of Formorian invaders, spirit creatures from another realm that steal the bodies of creatures and people alike, using them until they decay beyond help. And they have Lily's grandmother. As Lily learns more and more of Galamar and his quest to steal the powers of the four portal keepers, it becomes apparent that Lily is following in his footsteps, and not by chance. A prophecy tells of one who will complete his quest and turn back time. Unlike many sequels or middle books, this one doesn't lose steam. If anything the danger and the stakes are even higher.

Like the first in the series, The Quest of Galamar is well-written and fresh. There is some kissing, but nothing a middle schooler shouldn't read about, pretty tame. We learn a great deal more about the enemies and history of the fairy tale world the heroes are in, and through it all, there's never a dull moment. I enjoyed how Heather is developed in this story, though I wasn't sure what to think of Jude when he joined the team.

My favorite parts of the book were when Lily was reading about Galamar. Strangely enough, these were also the source of my biggest beef with the story. Lily would be interupted by her companions or "real life" right in the middle of a tale and never seemed to get back to the same story. I guess it bugged me because I like to read stories from start to finish, while Lily seems to be a bit of a browser, reading this or that on a whim. But, the snippets we do get of the history of Galamar are quite good, and I was always happy to see another one start, even knowing I probably wouldn't get the whole story.

Overall, this is another fine installment in the Storyteller series. Those who liked the style and direction the first book was taking will likely enjoy this one, too. I recommend reading them in order and having all three books in your possession before you start, because you won't want to stop once you get going.

I was lucky to have won a copy of all three books in the series in a contest.