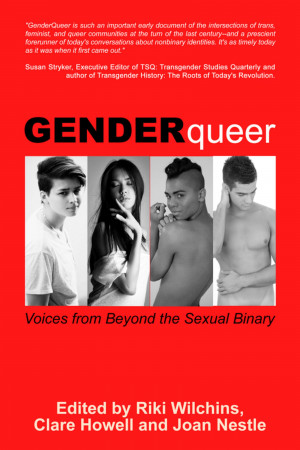 GenderQueer-Voices from Beyond the Sexual Binary

Perhaps more than any other issue, gender identity has galvanized the queer community in recent years. The questions go beyond the nature of male/female to a yet-to-be-traversed region that lies somewhere between and beyond biologically determined gender. In this groundbreaking anthology, first published nearly two decades ago, three experts in gender studies and politics navigate around rigid, societally imposed concepts of two genders to discover and illuminate the limitless possibilities of identity. Thirty first-person accounts of gender construction, exploration, and questioning provide the groundwork for cultural discussion, political action, and even greater possibilities of autonomous gender choices.

Riki Wilchins is an author, activist and gender theorist. The founding E.D. of GenderPAC, she is the author of Queer Theory/Gender Theory: An Instant Primer (Magnus) and co-editor of GenderQueer: Voices from Beyond the Sexual Binary (Magnus). Her work has been published in periodicals like the Village Voice and Social Text, as well as anthologies like Feminist Frontiers, Language Awareness, and The Encyclopedia of Identity. She has been profiled in the New York Times and Time Magazine selected her one of “100 Civic Innovators for the 21st Century.”

You have subscribed to alerts for Riki Wilchins.

You have been added to Riki Wilchins's favorite list.

You can also sign-up to receive email notifications whenever Riki Wilchins releases a new book.