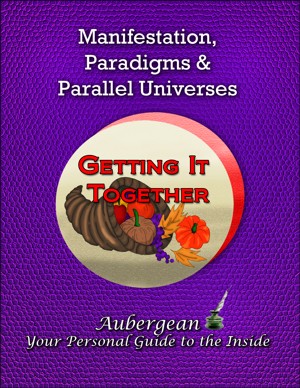 This powerful book gives you tools and techniques to make manifestation possible and even provides insight into how new paradigms are created from parallel realities. Co-create properly and the Universe works on your behalf with these teachings based on spiritual laws. What sense is there in harvesting flotsam and jetsam, when life can be really good!

Author Aubergean instructs you, "Keep in mind that in the World of Manifestation, you will not learn about dogma and religion, but rather you are entering into the World of Wonder so you can begin creating Magic in your life." The understanding of God taught by Aubergean is not based on a God of dogma, but on a universal belief that Life is God and God is Life and It is All God.

This is a powerful book to add to your collection of Getting It Together Series. The free Meditation Guide is used in this lesson of the book series too.

Comments
This book fine tuned my understanding and use of the spiritual laws and I'm delighted I studied this material. My friends suggest I write a Book of Manifestations because of the wonders that have appeared in my life using the tools and principles taught in the Manifestation book!
James T.

Excerpt
"This lesson is about Manifestation through the Spoken Word. It delves into the very laws of creation and involves studies that lead to conscious co-creation with your Higher Self. Manifesting with your word is something you do continually but all too often, you are not conscious of the activity. You simply don’t recognize what you are doing, having not one clue about the process.
Let's address the word metaphysics for a moment and understand it as a way to understand reality from a point of view beyond physics. In the metaphysical world, someone who unknowingly follows his or her Spiritual guidance is called an Unconscious Competent. Massive numbers of people, probably billions among us on Spaceship Earth, however, habitually miscreate since they have no idea what they are doing. In which category do you live?
Stop and think long enough to truly know your answer to this important question.
The first and most important step in becoming a Conscious and Competent co-creator is to make and accept the truth that every event in your life originates with you, your thinking process, and how it is filtered by those things you believe to be so, regardless of whether your beliefs are founded on truth or error. Know that even when negative events occur in your life, you created that too. This concept is so profound that it is repeated now so you can locate it again and again for you must Know, Remember, and Apply this throughout your lifetime!
Every Life Event is a Product of Your Creation! ..."
Available ebook formats: epub mobi pdf rtf lrf pdb txt html
First 30% Sample: epub mobi (Kindle) lrf more Online Reader
pdb
Price: $2.99 USD
Buy Add to Library Give as a Gift
How gifting works
Create Widget
Tags: spirituality manifest awakening laws of the universe spirituality personal development religion creative thinking intelligence selfhelp philosophy creative minds science metaphysics faith improvement myths biblical symbolism spirituality inspirational personal development religion creative thinking intelligence selfhelp philosophy creative minds science metaphysics faith improvement myths biblical symbolism manifest divinity attunement parallel realities manifest destiny spirituality motivation education science religion mindbodyspirit health heal wellness philosophy spirituality applied spiritual laws manifesting change awakening enlightenment manifesting technique manifesting abundance
About Aubergean

Who is Aubergean?
From a one room shack in Canada, without running water or plumbing, Aubergean, age 3, noticed he was different from others. His hard working parents had little time outside work, so Aubergean observed his siblings. At work with his Mother at a fruit cannery for 10 hours a day, he was still mostly alone. His silence served him well over the years.
His first job as a service station attendant was really about sweeping outside. Blisters interfered with his guitar-playing, so he recruited help and split his pay 3-ways – his first venture as an employer.
Early on, he had an innate sense of the mystical world of Spirit. Life has a mysterious way of fitting a man to his destiny, he says, and he moved on.
Eventually many attended his workshops on human behaviour in finance and investment. Many mentors taught him to take responsibility for thoughts, words, and deeds. Mastering life’s lessons didn’t come easy and much was learned at the School of Hard Knocks.
Aubergean earned and lost several fortunes along the way. The illusion and importance of wealth serves the purpose of discovering life's purpose thus causing surrender to the soul and to a better way than chasing wealth.
His spiritual life became his passion. Over 30+ years, Aubergean mastered Meditation – Silence – Wisdom from Source – with 9 years spent in silence. The importance of meditation and its rewards remain the fulcrum of the Spiritual lessons he offers.
Be all that you can be, he says. 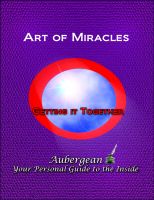 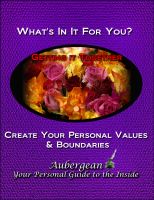 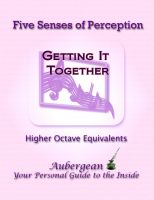 Reviews of Manifestation, Paradigms and Parallel Universes by Aubergean

You have subscribed to alerts for Aubergean.

You can also sign-up to receive email notifications whenever Aubergean releases a new book.