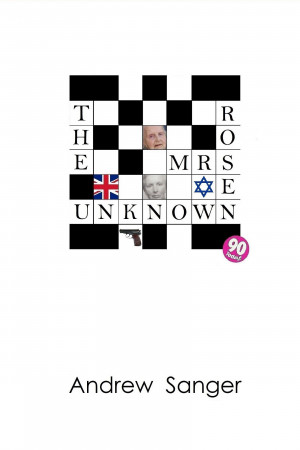 By Andrew Sanger
“A family is good cover. You do love them, though; the emotions, at least, are real.”
The Unknown Mrs Rosen tells the story of a spy, but this is no ordinary spy story.
It's about secrecy, duty, identity, a family torn apart by caring for their mother in her final years, and the contrast between the helpless person Marjorie Rosen is becoming and the brilliant, heroic woman she used to be. More
A story about a spy, a love story, and a hard look at what happens when people become old and need care. Mrs Rosen is an elderly, disabled widow who depends on help from friends and neighbours, her three grown-up children, and social services. But Mrs Rosen is also a fit and capable younger woman transferred from codebreaking at Bletchley and trained for a solo mission into wartime Germany. This defines the rest of her life, a life spent in Cold War secret intelligence, a life about which her chidren and carers know nothing.
Available ebook formats: epub mobi lrf pdb
First 15% Sample: epub mobi (Kindle) lrf more
pdb
Price: $2.99 USD
Buy Add to Library Give as a Gift
How gifting works
Create Widget
Tags: jewish fiction cold war mi6 family confict code breaking new forest social care elderly care bletchley park ww2 espionage
About Andrew Sanger

The Unknown Mrs Rosen, published 2020, is about a former spy at the end of a secret life about which her family and carers know nothing. https://www.andrewsanger.com/the-unknown-mrs-rosen.

The J-Word, about an elderly man who seeks justice in his own way after being attacked by an antisemitic gang, was published in the UK in 2009 by Snowbooks, and came out in a Kindle edition in 2011. The rights returned to me in 2018, and a new edition was published. It was very well received in the UK, had excellent reviews in the British press, and was featured at London's Jewish Book Week and the Hampstead & Highgate Literary Festival. For more about The J-Word see https://www.andrewsanger.com/the-j-word

The Slave, about a young 'client' who tries to free a woman from forced prostitution, was published in 2013 at Smashwords as an ebook for multiple platforms, and is also available as a paperback. https://www.andrewsanger.com/the-slave.

Love, published 2015, is a story of heartbreak on the hippie trail, set in the heady atmosphere of the late Sixties. https://www.andrewsanger.com/love.

To read about my novels and see what reviewers thought of them, see https://www.andrewsanger.com.

Reviews of The Unknown Mrs Rosen by Andrew Sanger

You have subscribed to alerts for Andrew Sanger.

You have been added to Andrew Sanger's favorite list.

You can also sign-up to receive email notifications whenever Andrew Sanger releases a new book.