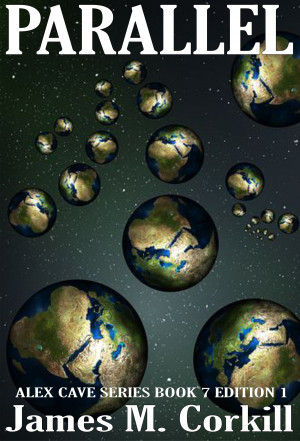 By James M Corkill
Rated 4.00/5 based on 1 review
Some experiments should not be attempted, in this science fiction mystery. More
Geophysicist Alex Cave discovers an ancient alien laboratory under the Northern Pacific Ocean and manages to get inside, but he’s tricked into entering one of the experiments and enters an alternate reality, where society never went through the dark ages and devoted their lives to knowledge and science. People live long and happy lives and it seems an ideal way of life, until he learns the secret of their longevity and wants no part of it.

Things go from bad to worse when he discovers one part of this society is going to extremes to save the minds of the geniuses who make their lives worth living, whether they like it or not. To add to his desperation, this reality is like a magnet to his physiology, and is slowly draining his energy.

He begins a desperate quest to get back to his reality, breaking hearts and making enemies of his friends in the process, but he has no choice. If he doesn’t get home, he’ll die.

A fantastic ride, with thrilling scenarios, exhilarating situations, and nail-biting suspense by this bestselling and award winning author.

I have read all books from James Corkill and they represent enjoyable reads. This time, Alex is involved in a time experiment that goes horribly wrong. He finds himself in an alternate reality/universe. Most of this story deals with his being in this alternate reality and he eventually finds that most of the world population there has been converted to Androids. How that has happened is actually quite gruesome. Can he ever escape from that parallel universe?
I am a fan of hard SF where present technology is extrapolated into the far future in a logical way. I cannot say that alternate universes belong to my way of seeing logic, but that is only my opinion. The story itself is engaging enough to compensate for this. Another thing is that Parallel is written in the present tense. I prefer the tense to be in the past which to me flows better. Once again, I am expressing my own opinion. Having said this, for fans of SF, this book is well worth reading and some of the predictions in this book are already taking place today.

You have subscribed to Smashwords Alerts new release notifications for James M Corkill.