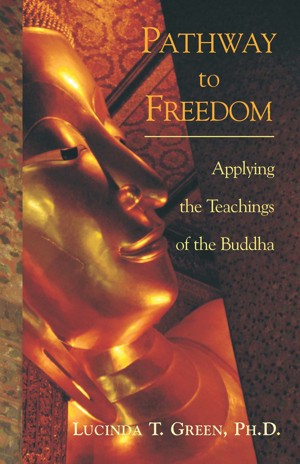 Pathway to Freedom: Applying the Teachings of the Buddha

By Lucinda Green
Pathway includes teachings on the Four Noble Truths, the Eightfold Path, the Four Divine Abidings of Loving-Kindness, Compassion, Sympathetic Joy and Equanimity, as well as reflections on Awareness vs. Insight, Dissolving Duality, and an original Map of Practice outlining the highs and lows, pitfalls, challenges and insights you are likely to encounter in a long term spiritual practice. More
How do you seemlessly incorporate the ancient teachings of the Buddha into your everyday modern life? How do you live the Dharma? This book shares the teachings of the Dharma, universal truths as taught by the Buddha in a down-to-earth practical way. Not only are the depth of teachings made immediately accessible to you in this book, meditation practices are included throughout to help you deepen your spiritual practice, knowledge and understanding about the path. This book brings the teachings to life! To your life. Stories, poetry, and sayings from the Buddha are interwoven with knowledge, creating a lively rich texture to the read.

Lucinda Green, Ph.D. was born to meditate. She is the founder and director of Rocky Mountain Insight, a Buddhist Vipassana meditation Center. Dr. Green first began meditating in 1967, and while living in India in the early 1970’s, pursued studies of philosophy, yoga and meditation as part of her undergraduate collegiate education.
She began Vipassana meditation in 1976 and in the late 1970’s met her root teacher Ruth Denison. This meeting proved to be an auspicious event which led Lucinda into a life long study and practice of the Dharma, teachings of the Buddha, These teachings were avidly pursued through studies at Nyingma Institute in Berkeley, CA. and with numerous Buddhist teachers including Jack Kornfield, Joseph Goldstein, Pema Chodron, Thich Nhat Hanh, Christopher Titmus, Rina Sircar, and U Silananda..
Upon receiving her Ph.D. in Transpersonal Counseling Psychology in the mid-eighties, Dr. Green rewarded herself by traveling once again to Asia where she donned monastic robes and lived as a Buddhist nun in Sri Lanka under the tutelage of Venerable Ayya Khema, whom she considers her second teacher.
Upon return, Dr. Green received Dharma transmission from her mentor Ruth Denison, becoming a lineage holder in the Burmese tradition of Buddhism. It is her profound joy to share the Dharma.

You have subscribed to alerts for Lucinda Green.

You have been added to Lucinda Green's favorite list.

You can also sign-up to receive email notifications whenever Lucinda Green releases a new book.