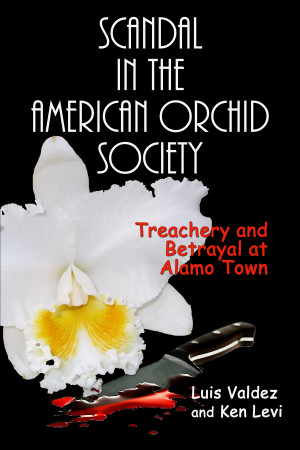 Scandal in the American Orchid Society: Treachery and Betrayal at Alamo Town

In a larger sense, it’s a tell-all tale about gross mismanagement in a voluntary society, and it reflects not only on the ineptitude of the current AOS leaders, but also on the culpability of the American Orchid Society, their parent organization.

I grew up in the border town of Eagle Pass, Tx. My Mom loved plants and her passion for them inspired me. After graduating from Eagle Pass High School in 1992, I moved away to go to school at A&M Kingsville. There, I took on a job as a gardener/greenhouse helper, assisting Dr. Peter Felker graft hundreds of mesquite trees. I loved that job! Then, my life shifted trajectories. I joined the U.S. Navy, and received orders for Japan, where I remained for three years. While stationed in that country, my ship, the USS Thach, took me to countries like Thailand, Malaysia, Singapore, Dubai, the Philippine Islands and even Australia. I couldn't have asked for a better Navy home base. Four years later, I was back in America, I moved to San Antonio, Tx. and continued my schooling. After graduating from Our Lady of the Lake Universary, I attended my first Alamo Orchid Society (AOS) Orchid Show in 2013. I loved it. So, I joined the Society and became a very active member. Ultimately, I was elected AOS President in 2017 and again in 2018. I also became Curator of the San Antonio Botanical Gardens orchid greenhouse during that time. But in 2020, I received a shock! The new AOS Board of Directors expelled me from the Society. How and why that happened is the subject of my book.

You have subscribed to alerts for Luis Valdez.

You have been added to Luis Valdez's favorite list.

You can also sign-up to receive email notifications whenever Luis Valdez releases a new book.