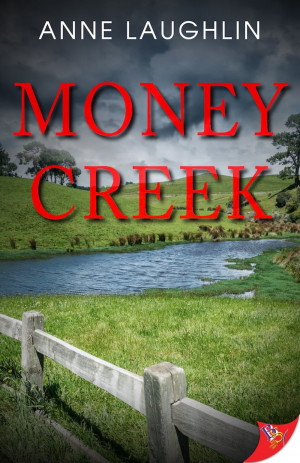 By Anne Laughlin
Clare Lehane is a troubled lawyer from Chicago who tries to make her way in a rural town full of secrets and deceptions. More
All Clare Lehane wanted was a new start. When her problem with pills costs her her job in Chicago, she moves to Money Creek in rural Illinois to take up her legal career in a small firm and remake her life. But old habits die hard, and she soon finds a drug dealer, Henry, who turns out to be the son of her new boss. Henry blackmails Clare into helping him launder drug money, but his plans don’t stop there: he intends to make her part of his cartel.

Everything changes when Clare goes to a party with Henry and his associates. While she’s in the bathroom, the rest of the party is ambushed and killed. She flees the scene of the crime and calls in the murders anonymously. If anyone finds out she was there and saw the killer as they were leaving, she’d lose everything—the job she loves, her law license, and especially her burgeoning relationship with Freya Saucedo, a member of the local drug task force.

Clare is living a lie that runs deep, and telling the truth may come at a devastating price.

Anne Laughlin is the author of three novels from Bold Strokes: Veritas, The Collectors (under a pen name), and Runaway. Veritas won a Goldie award for lesbian mystery in 2010, and The Collectors was shortlisted for a Lammy Award in lesbian erotica in 2012, won a Goldie award, and was produced as an audio book through Audible.com. Runaway has been shortlisted for a 2013 Lammy Award.

Anne’s short fiction has appeared in a number of anthologies. She is a finalist in the 2013 short fiction contest of the Saints and Sinners Literary Festival.

Anne was named a fellow in the Lambda Literary Foundation’s Emerging Writer program in 2008. She has attended writing residencies at Ragdale and Vermont Studio Center for the Arts. She lives in Chicago with her partner, Linda.

You have subscribed to alerts for Anne Laughlin.

You have been added to Anne Laughlin's favorite list.

You can also sign-up to receive email notifications whenever Anne Laughlin releases a new book.