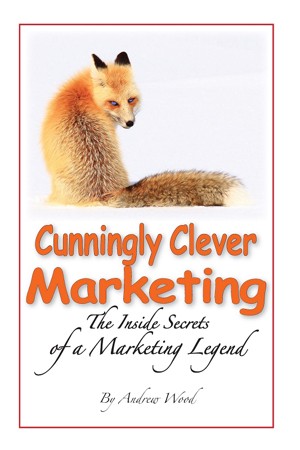 By Andrew Wood
Discover the inside secrets of a battle tested marketing legend, along with a bulletproof blueprint for superior marketing success. Chock full of graphics, examples and stories you'll find it a fast, easy, read that's fun, entertaining, practical and proven! Jam-packed with powerful ideas, tactics and strategies to quickly and ethically double, even triple your sales through superior marketing! More
In these troubled times there is nothing more important to your business, career and indeed survival, than to make your marketing astonishingly more effective than any of your competitors!

Read or listen to Cunningly Clever Marketing and watch your marketing's performance soar with innovative strategies for turning an ordinary business into an extraordinary business and immunizing yourself from recession. It s over 300 stimulating pages jam-packed with powerful ideas, tactics and strategies to quickly and ethically double, even triple your sales, through superior marketing!

Chock full of graphics, examples and stories you ll find it a fast, easy, read that s fun, entertaining, practical and proven!

You'll get inside secrets from a battle tested marketing legend, along with a bulletproof blueprint for superior marketing success. Make every dime you spend on marketing count!

-Why entertaining marketing produces astonishing response, but only if it's done right!
-Why Bruce Lipshitz can sell $200 blue jeans that you couldn't sell for $50!
-The outrageous marketing campaign generated millions, in new business, for a Michigan resort!
-The 7 million dollar sales letter that works in any industry to open doors!
-The secret to getting other companies to promote your business to their customers for free!
-How to build a massive prospect database in just days
-Why Your Company s Current Web Strategy is Almost Certainly Wrong ... and...Costing You Millions in Lost Revenue!
-Exactly why your current marketing is not producing the results you want!
-Ninja marketing, for stealing business from your competitors!
-How to quickly generate $250,000 without a loan, a rich uncle or a gun!
-The Changing Face of E-mail Marketing - How to Boost Your Delivery Rates!
-The Important Art of Getting Paid Getting Paid! Generating a stunning response from your collection letters!
-Taking Out Your Competition With A Bottle of Dom Perrigion
-How an Ad, in The LA Times, For Motivational Guru, Anthony Robbins Made Me $18,000 in Less Than a Minute!
-Building Your Million-Dollar Mailing List in Six Weeks or Less!
-Getting inside your prospects heads with your marketing message
-How I Made $75,000 in Three Days From an 11-Page E-mail No One Read!
-Selling Ferraris on e-Bay and the power of the damaging admission
-Thunderbolt Marketing the world s most devastatingly effective marketing strategy
-The unknown and or largely ignored secrets of effective website design Irresistible Offers and Ironclad Guarantees - Your Secret Weapon in the Battle for Massive Response!
-There Are Only Three Ways to Grow a Business...Any Business!
-Preach to The Choir Don t Try to Covert The Muslims

In Cunningly Clever Marketing I m going to share with you a lot of exciting ideas and concepts. I m going to give you specific examples and case histories. I m also going to tell you in detail about what works and what doesn't...

Andrew began his love of golf in 1975 on the day his Scottish uncle took him to Cow Glen Golf Club near Glasgow. On this fateful day, the club was cleaning out five decades of junk from the golf shop and tossing it straight into a dumpster. The old professional who served the club faithfully for over 50 years had recently passed away. Ever the canny Scot, Andrew's Uncle Forbes rescued a leather bag, some tatty golf balls and 50 hickory shafted golf clubs. These included a fully matched set of Bobby Jones Spalding irons that were unfortunately cut down to suit the young lad's swing. This was due to some seriously poor planning.

Three years later at age 15, Wood was Club Champion at Lilleshall Hall Golf Club in Shropshire, England and his life-long love affair with the game had blossomed. 1978 saw a fatal decision in young Wood's life when he embarked upon a mission to hit no less than 500 balls a day. Unfortunately, while Wood reached his goal, the influence of Jack Nicklaus's book, Golf My Way, resulted in a chronic flying elbow from which he is still trying to recover today! Nevertheless, The Golden Bear remains Andrew Wood's hero to this day.

Undeterred, the next three years saw Wood frequently playing 63 holes a day (in the summer) and even moving his parent's small holiday trailer (caravan to UK residents) to a field adjoining the club so time was not wasted on the 8-mile trip from his home. He wintered in Lytham, St. Anne's, where although it was bitterly cold, the snow seldom remained and his favorite PGA, Professional, Gwillam - "I never saw a shot I liked go right" - Hardiman, was his teacher.

Journey Across The Pond

With another cold and wet British winter set to interfere with his plans for golfing stardom, arrangements were made to send young Wood to a friend of a friend in California. The day before Thanksgiving in 1980 and armed with his golf clubs and just $300, he arrived in the former colonies at age 18. Fate intervened and Andrew was diverted to Florida. His goal, like many others, was to compete on the PGA Tour. Despite getting a walk-on golf scholarship at a Florida college 18 months later, lack of superior golfing talent ultimately held him back from a successful career on the Tour!

However, he did gain tremendous experience as a successful bag boy, shop assistant, cart jockey, club waiter and occasional fill-in member of the grounds crew. He made final qualifying of the 1984 British Open at St. Andrews where he shot a respectable 72-76 and to the quarter finals of the English Amateur at Wentworth and even won the Wem Bowl. At least he's got that going for him!

Finally moving to California in late 1985, Wood accidentally got involved in the marketing effort of a chain of karate schools and met Legendary Marketing's Matt Fiorenza. Having found his true talent for marketing, Wood quickly picked up numerous golf accounts, including resorts, equipment manufacturers and golf schools. While his passion was golf, the incredible success of his marketing campaigns led him into an ownership position in a martial arts company of which he ultimately gained sole ownership.

Within a decade, he had taken 12 schools into a national chain that, together with affiliates, totaled over 400 locations. It was the experience of developing the sales and marketing systems of a national franchise from scratch that gave him the marketing foundation, and the money, to finally turn his talent back to his true love of golf.

The Birth of a Legend

After selling the martial arts company, and taking two years off to write books, including Legendary Leadership, Dominate Your Market, Selling With Confidence and The Traits of Champions, Legendary Marketing was founded by Wood in late 1999 and is headquartered in Lecanto, Florida (which not by accident, is located near famed Black Diamond Ranch Golf Club) where Andrew lives today.

Wood, a pioneer in Internet marketing, with sites dating back to the web's infancy in 1994 decided to use his expertise to develop a golf specific solution. Legendary Marketing made its first big splash in 2000 with the introduction of a totally new kind of golf website, the Legendary Marketing Smartsite. Incredibly powerful - yet easy to use - the technology quickly became accepted as the best in the industry and resulted in spectacular growth for his company.

In 2002, already established as the leader in new technology, Legendary Marketing turned its attention back to its roots with a focus on response driven direct mail and print advertising campaigns. There they introduced the industry to the power of Thunderbolt Marketing (our proprietary technique of multiple mailings) and the to effectiveness in generating leads of the highest caliber.

2003 saw the first of our Golf Marketing Boot Camps, an intensive three day program that has opened the eyes of over 200 owners and managers so far, to some amazing ways to improve their marketing. .

2004 saw the launch the Golf Marketing Success System, a revolutionary systematic way of marketing that provides clubs with a totally integrated and predictable blueprint for marketing success. The program consists of 24, specific manuals with step-by-step instructions on how to improve each area of their marketing.

December 2005, saw the publication of Andrew's book, The Golf Marketing Bible, which contains 420 pages of cutting edge, golf marketing information and quickly became a bestseller. The book has also been adopted as a textbook by the marketing program of several colleges, here and abroad.

After six years of industry leadership with our Smartsite web solution, 2006 saw the launch of the next generation of more powerful online marketing tools contained in our Marketing Commandersolutions. Over one million dollars was invested in our efforts to design the ultimate website/CRM/lead tracking, reporting and staff training tool.

This year also saw the launch of the Membership Sales Success System the most comprehensive training available to help clubs train their frontline staff to how to sell memberships. The eight manual program was an instant success!

We top off the year by moving into our new state of the art Legendary Ranch. The three building, 6,000 ft complex, has fiber optics and wireless throughout for easy movement, along with formal and casual meeting space. Staff can work indoors or out and enjoy picnic benches, cafe style tables or seek inspiration from the waterfall and Zen garden.

While golf is mostly an individual effort, marketing is not! Andrew has built a "Legendary" team with the finest graphic designers, copywriters, computer programmers and marketing specialists in the business. All of them are instilled with the same type of passion and results driven attitude that is the fuel of the company's success.

In January 2009, Andrew published Cunningly Clever Marketing: Inside Secrets of a Marketing Legend.

In January 2011, Andrew published his third installment of the Cunningly Clever Series; Cunningly Clever Entrepreneur: Secrets to Your First Few Millions with information on how to start, grow, survive and thrive in your own business!

You have subscribed to alerts for Andrew Wood.

You have been added to Andrew Wood's favorite list.

You can also sign-up to receive email notifications whenever Andrew Wood releases a new book.