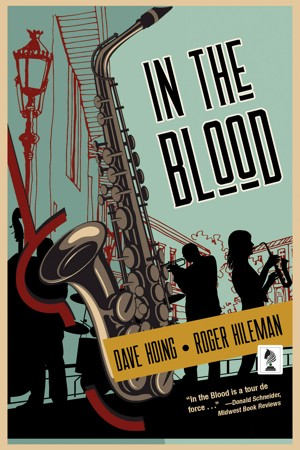 In real life, Dave Hoing is a library associate in the Special Collections and Archives unit of the University of Northern Iowa Library. His tenure there can be measured on a geologic time scale. He lives in Waterloo, Iowa, with his wife, Joni, a dog named Doodle, and a cat named Itzy. His adult stepchildren, Jon and Jovan, have emigrated to the fantasy land known as California.
In his other life, Dave is a member of Science Fiction and Fantasy Writers of America who no longer writes science fiction or fantasy. He pokes his fingers into a lot of other creative pies. In addition to writing, he dabbles in composing, drawing, painting, and sculpting. Music is his first love, but he concedes that he’s better at stringing words together than notes, so there are times when he must tear himself away from one kind of keyboard to work at another. He also enjoys traveling—42 states and 27 countries to date—and collecting antiquarian books printed before 1800.

Roger Hileman writes nonfiction for a testing company by day and fiction by night. Naturally, the biggest challenge for Roger is keeping them straight. He and writing partner Dave Hoing collaborated for many years by mailing reams of paper back and forth through the US mail. Then one day someone invented this thing called the Internet. There was much rejoicing.
Through the years, Roger has been involved with numerous musical theater productions on stage, in technical roles, and as orchestra director. He gigs around Iowa with groups such as the New Venue Big Band and CR Jazz. He began his writing career as a playwright, but Dave eventually turned him to the dark side of prose. Roger loves history, especially the family kind, so his ancestors frequently become fodder for his fiction.
In his nonfictional world, Roger and his wife, Lu, live in Iowa City. They have three daughters, Andrea, Rachel, and Carlye, and three grandchildren, Everett, Ellye, and Zachariah. No pets, but he plays a bass trombone he named Eddie.

You have subscribed to alerts for Hoing Hileman.

You have been added to Hoing Hileman's favorite list.

You can also sign-up to receive email notifications whenever Hoing Hileman releases a new book.