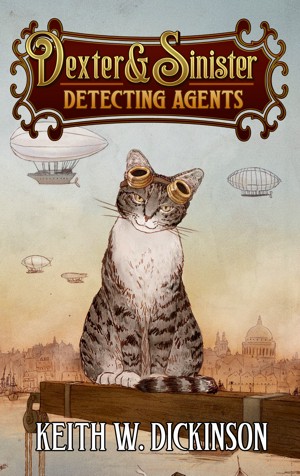 By Keith W. Dickinson
Hired to look into some shady goings on at the airship factory, John Sinister's investigation has barely begun before people start dying. Pretty soon he's on the wrong side of some very dodgy people, and that's when he meets Dexter, the world's only walking, talking mechanical cat. That's when things get complicated. More
1800s Hammersmyth. A city at the heart of the Great Steam Revolution. John Sinister, a man with friends in all the wrong places, is hired to look into some shady goings on at the airship factory. It might be nothing, but with the fortunes of the greatest inventor in the Britannic Empire at stake, you can bet John will do his best to get to the bottom of things (even if his best might generously be described as mildly shambolic). But when people start dying, and it looks like there might be a killer on the loose, John has to team up with Dexter, the world's only walking, talking mechanical cat, to try and figure out what the hell is going on. He’d rather not, but it doesn’t seem to be up to him. Dexter is going to make sure this “lazy sack of meat” does the job he was hired for if it’s the last thing he ever does. With secret societies, arrogant aristocrats, and criminal chocolatiers to contend with, John and Dexter are going to have to keep their wits about them if they’re going to come out of this alive. And if John happens to fall in love with his employer’s daughter along the way, well nobody said catching a killer was going to be easy now did they?
Available ebook formats: epub mobi pdf lrf pdb txt html
First 15% Sample: epub mobi (Kindle) lrf more Online Reader
pdb
Price: $3.95 USD
Buy Add to Library Give as a Gift
How gifting works
Create Widget
Tags: murder mystery fun victorian steampunk humour ya alternative history talking cat pratchett cosy crime
About Keith W. Dickinson

A lifelong lover of hats and the Lake District, when Keith’s not up a mountain he likes to write stories about airships, murderers, thieves, and talking cats. A writer since he was eight years old, his first novel, “Dexter & Sinister: Detecting Agents” will be published in the summer of 2020.

Keith has been around the world, set foot on six of the seven continents, ridden a camel, trained as a yoga teacher, lived in an ashram, got a tattoo he doesn’t regret, and invented a board game that he still hopes one day to inflict upon the world.

Keith was short-listed for the Lindisfarne Prize – an award for new crime writers in the north – in 2019, for his short story “Miss Bloom’s Final Summation.”

You have subscribed to alerts for Keith W. Dickinson.

You have been added to Keith W. Dickinson's favorite list.

You can also sign-up to receive email notifications whenever Keith W. Dickinson releases a new book.