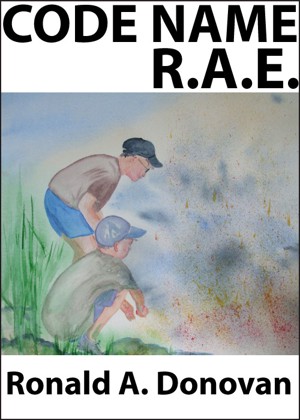 By Ron Donovan
Two teenage boys discover a special device that is so futuristic they can't even believe what it can do. The military is also looking for it, and for the owner of it. Follow their adventures as they try to protect the owner and the device without getting into trouble themselves.

Ronald A. Donovan is an accomplished writer of more than a dozen novels and numerous briefs, instructional books and studies written over the last 50+ years. Since 1999 he has written several stories, plays and novels that have been published in print format. Now in 2012 his books are being released in digital format in the form of eBooks (www.rondonovan.ca).

Ron comes from Nova Scotia and for many years lived and worked and raised a family in Nova Scotia, New Brunswick and Ontario. Now in his retirement he and his wife, Dorothy, live in Victoria British Columbia. He continues to write stories that inspire and cause people to think and persevere in their lives.

Ronald A. Donovan was born into the latter part of the depression in the 30's. In order for his parents, Bill and Grace Donovan to survive through those hungry times there was a great deal of need. The need was challenged by a time of belt tightening and hardship. As parents, Bill and Grace had to cut a good many luxuries in their lives and they learned to live close, always close to the poverty line. In order to live with these needs and in such poverty there was always a close affinity with want and poverty. With such hardship they learned to make life work while living with food at minimum portions.

Ron remembers this history and creates stories that build upon these humble beginnings.

Ron has a strong background of involvement in the church. Starting out with the Salvation Army in Halifax, to becoming a Salvation Army officer, to his married life in business, raising three children, he has never left the church behind. He founded an independent church in Chatham, Ontario in the 70's. To this day he is ready to minister when he is given the chance.

You have subscribed to alerts for Ron Donovan.

You have been added to Ron Donovan's favorite list.

You can also sign-up to receive email notifications whenever Ron Donovan releases a new book.