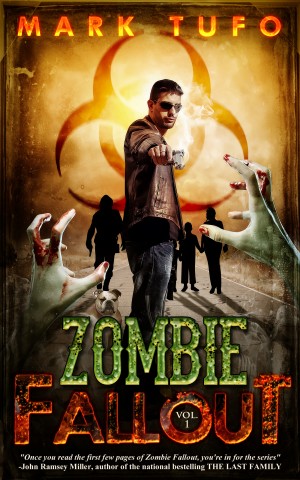 Reuters – Estimates say that nearly three thousand people nationwide, and fifteen thousand people worldwide have died of the H1N1 virus or Swine flu and nearly eighty thousand cases have been confirmed in hospitals and clinics across the United States and the world, the World Heath Organization reported.

Mark Tufo was born in Boston Massachusetts. He attended UMASS Amherst where he obtained a BA and later joined the US Marine Corp. He was stationed in Parris Island SC, Twenty Nine Palms CA and Kaneohe Bay Hawaii. After his tour he went into the Human Resources field with a worldwide financial institution and has gone back to college at CTU to complete his masters. He lives in Colorado with his wife, three kids and two English bulldogs. Visit him at marktufo.com for news on his next two installments of the Indian Hill trilogy and his latest book Zombie Fallout

i enjoyed this book, but made me cry

I love to read. I read a LOT. I read books in a wide variety of genre. I confess a preference for the paranormal and horror, so why have I not come across Mark Tufo’s books before?

Zombie Fallout is the first in a series and begins just after the plague starts. It is written in the form of a journal, which is narrated by the main character, Michael Talbot. Mike is forced to become the Man of the Hour when an untested H1N1 vaccine turns thousands into the walking dead. He’s healthy, he’s strong, he’s a former Marine, he’s got a good dose of common sense, and he has a sense of humor which helps in the sanity department. Being a touch paranoid, uh, I mean being a survivalist, he is prepared. He just never quite expected that he needed to be prepared for zombies, but he can adapt on the fly. Relying on his training and skills, Mike sets out to do whatever he can to save his family, friends, and as many of the still-living as possible.

Along the way, Mike meets quite the variety of characters, both heroic and vile. His cause is aided in unexpected and sometimes unexplainable ways by those you’d assume to be a liability rather than an asset. Ryan Seacrest lends a hand, in a unique way. People who could be of great help show their worst side, and choices have to be made. Somewhere along the line Mike also figures out that these zombies may be dead, but they’re not quite brain dead.

I found Mr. Tufo’s writing style to be refreshingly “real”. By that I mean he writes the way ordinary people talk – at least how people with Michael Talbot’s background would talk. Is the grammar and sentence structure perfect? No. Would your grammar and sentence structure be perfect if you were dodging zombies? Probably not. Mike’s wife and sons make what I’ll call “guest appearances”, taking over chapters when Mike is occupied elsewhere and unable to keep us up to speed on what’s happening. These chapters are written in an obviously different style, which to me proves Mr. Tufo’s intent.

At any rate, Zombie Fallout is an easy read. Gory? Yes, but it wouldn’t be a zombie story without some gore, right? It’s ok though, the sense of humor throughout brings balance to the blood and guts. This isn’t the kind of story that’ll give you nightmares, but it IS the kind of story that’s going to make you want to read Zombie Fallout 2 right away!

You have subscribed to alerts for Mark Tufo.

You have been added to Mark Tufo's favorite list.

You can also sign-up to receive email notifications whenever Mark Tufo releases a new book.