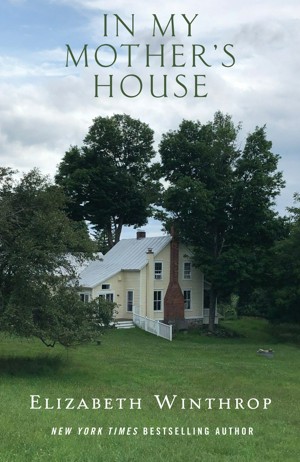 In My Mother's House

By Elizabeth Winthrop Alsop
A compelling novel of mothers and daughters torn apart by loss and twisted emotions, In My Mother’s House sweeps from the brownstones of turn-of-the-century New York to the stately farmlands of Connecticut, to explore a woman’s shame, a family’s deceit, and a final act of love. More
Lydia Franklin, daughter of a prosperous New York banker, grows up in a house filled with shadows and secrets. By the time she marries George Webster and moves to Connecticut, she is a dutiful wife obsessed with forgetting her past...controlling her daughter Charlotte's life...and vanquishing her personal demons. But Lydia's deeply buried yesterdays may taint her daughter's chance of happiness, and destroy her beautiful, artistic granddaughter Molly with the legacy of a truth too shocking to ever tell.

​A riveting novel of mother and daughters torn apart by loss and twisted emotions, In My Mother's House sweeps from the brownstones of turn-of-the-century New York to the stately farmlands of Connecticut to explore a woman's shame, a family's deceit, and a final act of love...

PRAISE FOR IN MY MOTHER'S HOUSE

“Accomplished… the portrait of Lydia is one of the novel’s triumphs.” - New York Times Book Review

“An utterly absorbing… resounding novel… Skillful and precise psychological threadwork…Crystalline images and genuine warmth for her characters…Winthrop powerfully illuminates one of the darker corners of the human psyche.” - Publishers Weekly

“Explores the fearful legacy of child abuse in the lives of three women… the author writes with the ease and narrative punch of a practiced storyteller.” - Kirkus Reviews

ELIZABETH WINTHROP (www.elizabethwinthrop.com) is the author of over sixty works of fiction for all ages, including Island Justice and In My Mother's House, both available as ebooks. Her short story, The Golden Darters, was selected by Best American Short Stories by Robert Stone and was recently read on SELECTED SHORTS by the renowned actress, Ann Dowd. Under the name Elizabeth Winthrop Alsop, she is the author of the memoir piece, Don't Knock Unless You're Bleeding; Growing Up in Cold War Washington. She has recently finished a memoir entitled Daughter of Spies: Wartime Secrets, Family Lies about her parents' love affair in England during the war and the complications of their marriage in the politically charged atmosphere of 1950s Washington. Her award-winning titles for children include The Castle in the Attic, Counting on Grace, The Red-Hot Rattoons and Dumpy La Rue. The daughter of Stewart Alsop, the political journalist, she divides her time between New York City and the Berkshires. For more information, www.elizabethwinthrop.com

You have subscribed to alerts for Elizabeth Winthrop Alsop.

You have been added to Elizabeth Winthrop Alsop's favorite list.

You can also sign-up to receive email notifications whenever Elizabeth Winthrop Alsop releases a new book.