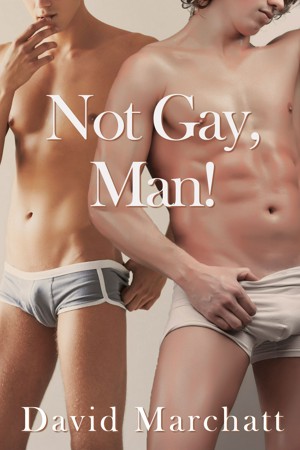 Rated 5.00/5 based on 1 reviews
When Greg falls for a gorgeous exhibitionist half his age, what he expects is a few lust-fuelled encounters. But what he finds is so much more than that. More
The last thing Greg expects to find when going grocery shopping is a gorgeous, blond show-off—but a very attractive young man half Greg’s age lifts his shirt and gives Greg a tantalizing peek.

For weeks afterward, Greg can’t get that exhibitionist out of his mind. It was one of those rare encounters that he’ll have to learn to treasure...until he runs into that young man again, and this time that young man is fully naked in the middle of a park, victim of a clothes-stealing prank from his friends.

Greg offers Chris—the naked young man—some modesty and an escape. And soon Chris is in Greg’s home, naked, declaring that he’s not gay, and yet clearly flirting with Greg.

Chris is brash and adventurous, seeking pleasure wherever pleasure can be found. Going along with the heat of the moment, for fear that it might never happen again, Greg gives in to Chris’s temptations and soon finds himself in a steamy lust triangle from his wildest dreams.

But lust can become love...with the right guy.

First time author David Marchatt is an avid reader of a wide range of materials, from sci-fi and fantasy to biography and politics. He lives in Australia with his partner of twenty-five years.

David is a fan of Rugby League in winter and cricket in summer, and enjoys exploring the less visited places of the country.

Greg is a single gay man in his thirties who is not out. One day while walking his dog Jack at the local park he meets Chris, a young nineteen years old guy. This meeting is awkward as Chris is completely naked after his friends decided to do this prank by taking off all his clothes and leaving him naked in the middle of the playfield. Greg helps him by taking him to his own place to give him something to wear. This exhibitionist young guy turns out to be more than what Greg expected. Although he kept saying he was not gay "Not gay, man!" he enjoyed playing with Greg calling it just "Fun". Yeah 😁. A kind of friendship develops between the two guys. One night Chris brings two more friends over to Greg's place to play poker and that night a special bond starts between Greg and Chris's friend Brett. It gradually turns out into something very passionate and beautiful. The story consists of thirty-one chapters and is narrated from Greg's point of view.

This is such a great debut for David Marchatt. There are many things here to love. The characters were incredible. I loved the three main characters a lot. Greg is that sweet considerate guy. Yes, he is the lonely type but I feel he is the kind of a guy who can make any man’s heart warm up by his generosity and politeness. He is someone you would like to have as a friend or a lover. Chris with his catchphrase "I'm not gay, man!" is a cocky exhibitionist kind of guy, he represents many guys who are confused about their sexuality or those who still are not open to themselves to accept who they are. Brett at first appears as a shy and not a confident boy but Greg's presence in his life changes that completely. Marchatt has brilliantly created three kinds of relationships between the three. While Chris and Brett's bond was more a bro and friendship type, Chris and Greg's was purely about lust and fun. Then later we see a relationship that is based on lust that turns into love between Greg and Brett. I find this kind of mix to be fantastic. This is mainly an erotica story but with the brain, as there are some important issues that the story touches in a subtle way like coming out, violence against gay people, or homophobia. Nothing felt forced at all which is why I appreciated the incorporation of these subjects in such an efficient way. Since this is an erotic tale which makes evaluating the sex scenes is something very important. Let me tell you that the steamy scenes are plenty and in different flavors. They are fun, detailed, graphic, and will raise your body temperature in a good way! Oral, anal, and threesome. All are there for your enjoyment. I feel the age gap between the characters added more heat to the story and the action scenes. The book has a nice cover. Those two models represent both Chris and Brett very well. Not Gay, Man! has it all, friendship, kindness, lust, and love. I don't see anybody who will be disappointed reading it. David Marchatt definitely has a winner here and I will be looking forward to reading more of his future work.

Many thanks to the publisher Deep Desires Press for providing me a free copy of this book in exchange for this honest and unbiased review.

You have subscribed to alerts for David Marchatt.

You have been added to David Marchatt's favorite list.

You can also sign-up to receive email notifications whenever David Marchatt releases a new book.