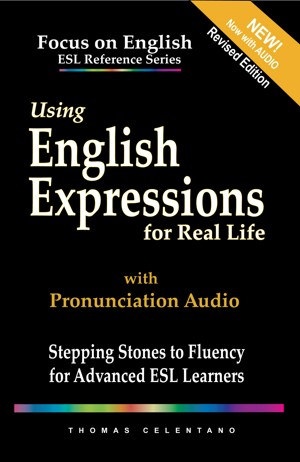 This book is for all advanced English learners who want to improve their fluency in English: ESL and ESOL students, TOEIC and TOEFL students, Cambridge students, GED students and anyone wanting to improve their English proficiency by expanding their knowledge of how English speakers compile idioms and expressions in real-life conversation.

Thomas Celentano has published seven books and multiple articles about English grammar for English students worldwide. His 810-page "The Big Book of English Grammar" is a culmination of his work. He is also the novelist behind R. Cameron Bryce's "When Pigs and Horses Fly" ("Under the Giant Mimosa") and "Killing Tony, Excerpts from My Diary."

An avid surfer, sailor and adventurer, he has spent years crisscrossing the South Pacific Ocean on his 8.3 meter sailboat, Carrie Ann, capturing, on film and in audio recordings, the sights and sounds of island communities there.

You have subscribed to alerts for Thomas Celentano.

You have been added to Thomas Celentano's favorite list.

You can also sign-up to receive email notifications whenever Thomas Celentano releases a new book.