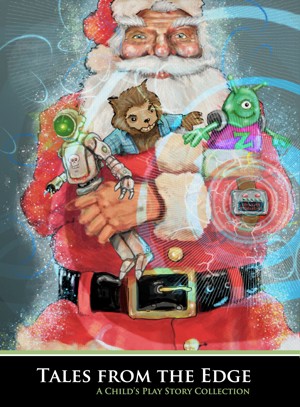 Tales from the Edge - A Child's Play Story Collection

By Richard Bacon
A collection of stories and poems for children of all ages, from 1 to 101!

This is a charity anthology with all proceeds being donated to the Child's Play charity. More
A collection of stories and poems for children of all ages, from 1 to 101!

Younger children will delight in tales and poems about Goblins, Fairies, Princesses and a Bovine encounter of the third kind, plus many more!

For older children, (and adults!), there are tales of ancient supernatural conflicts happening right under our noses, dreams that come true and a cautionary tale if you are going down to the woods today. You might get a big surprise!

And finally, revealed for the first time, the TRUE story about Father Christmas…

These are the Tales from the Edge.

All proceeds from this book are being donated to the Child’s Play charity who provide games and game consoles to children in hospital. None of the contributers are being paid for their stories and have kindly donated them for inclusion in this book.

Thank you for supporting this charity anthology.

You can find out more about the charity from their official website: www.childsplaycharity.org

Richard Bacon was born in Nottingham, England, where he still resides with his wife and daughter.

Richard has had a keen interest in books and reading since an early age, as well as a highly active imagination. Now a 'grown up' he has begun writing down his ideas and is now almost constantly working on, or thinking about, new ideas and adventures.

You can read Richard's work in the following books:

'Cinders - The True Legend', a modern retelling of the Cinderella story.

'Time, Space and Taxes', a collection of Science Fiction and Fantasy short stories.

The short story 'Special Delivery' by Richard is also available within the 'Pocketful of Moondust' anthology for children published by Rebel Books LLP.

You have subscribed to alerts for Richard Bacon.

You have been added to Richard Bacon's favorite list.

You can also sign-up to receive email notifications whenever Richard Bacon releases a new book.