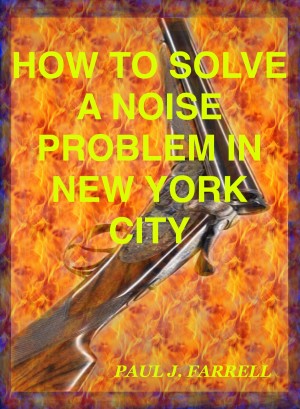 How To Solve A Noise Problem In New York City

P.J. Farrell is a high school graduate with a few college credits in various subjects. He enlisted in the Army in 1965, served in Vietnam with the First Infantry Division from July 1966 to July 1967 and was a drill instructor until discharged in 1968. He served with the Peace Corps working with the Ministry of Health in the Fiji Islands from 1982 to 1984. Mr. Farrell has worked at an assortment of different jobs but still lives in a state of poverty, presently collecting social security and occasionally working as a handyman. His first book "This We Defend" which now has a new title, "How to Solve a Noise Problem in New York City," failed to generate the necessary income required to become a member of the lower middle class, a goal he has not yet given up. His second book, "What A Load of Crap; You Got Mail" was written in the hope of rectifying his present financial situation. P.J. Farrell is working on his third book, the follow-up of "How to Solve a Noise Problem in New York City," which will tell the story on how he acquired back from New York City his Winchester Model 1300, 12 gauge shotgun and his Browning semi-automatic .22 rifle, along with his Constitutional right to own and possess a firearm in America, without having to pay a fee.

You have subscribed to alerts for Paul Farrell.

You have been added to Paul Farrell's favorite list.

You can also sign-up to receive email notifications whenever Paul Farrell releases a new book.