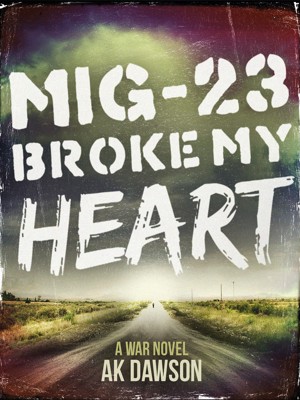 By AK Dawson
Rated 5.00/5 based on 1 review
The year is 1988. Eighteen-year-old Thomas Green, an aspiring artist, has been plucked from his comfortable, suburban existence in apartheid South Africa and thrown onto the frontline of his country’s war against what it sees as terrorism. More
The year is 1988.

Eighteen-year-old Thomas Green, weed smoker and would-be artist, has been plucked from his comfortable, suburban existence in apartheid South Africa and thrown onto the frontline of his country’s war against what it sees as terrorism.

As a conscript in the South African Defence Force, it’s Thomas’s job to watch the hot, sandy border for signs of the mysterious ‘red menace’.

There are no bars nearby, no art galleries, no cinemas and no air-conditioned shopping malls. Worst of all, there are no lithe young ladies willing to pose nude for an eager painter-in-training. What Thomas has found in plentiful supply are sand dunes, barbwire fences and landmines. He may as well have landed in hell.

When a man approaches on foot from Angola, the place where the terrorists are said to come from, Thomas discovers that life can still get a whole lot worse.

MiG-23 Broke my Heart is a war novel, a tale of action and adventure, a fictional road trip and – deep in its dark heart –a love story.

Please be advised that the novel contains violence, hard-biting humour and sensitive subject matter that some readers may find disturbing.

Originally from South Africa, AK Dawson lives in Gateshead, in the North East of England. 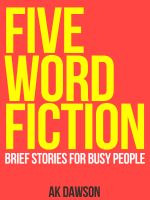 Reviews of MiG-23 Broke my Heart by AK Dawson

I’m honestly not sure whether to describe AK Dawson’s MiG-23 Broke My Heart as an easy read or a hard one. On the one hand, I found myself breezing through huge chunks of the novel at a time. On the other, it’s not exactly a pleasant book. There are some flashes of truly brilliant description, but they’re nestled among--and often within--moments of staggering violence. A conscript in the South African Border War, the protagonist, Thomas Green, initially has little to do but keep a rifle pointed towards Angola. However, a secret mission--and a letter from a girl back home in Durban--complicate things enormously.

These two points are interwoven throughout the novel, and certainly provide an interesting plot, one taking over whenever the other dies down. However, in many ways, it’s the things happening underneath the surface that give the story such texture. The word “apartheid” is used only three times. However, in 1988 South Africa, the issue itself is unavoidable, and is an obvious presence in the way the characters interact and, ultimately, how the story plays out. Though the conflict with Angola is presented as a battle against Communism, there is always a sense of a second war being waged within South Africa itself: that of white against black.

However, for the most part this remains in the background. The focus is very much on Thomas himself: how he struggles to get through his time in the army and, like so many soldiers, how he continues to struggle once it is over. By focusing on this personal story, Dawson allows the biggest issues to speak for themselves.

You have subscribed to alerts for AK Dawson.

You have been added to AK Dawson's favorite list.

You can also sign-up to receive email notifications whenever AK Dawson releases a new book.