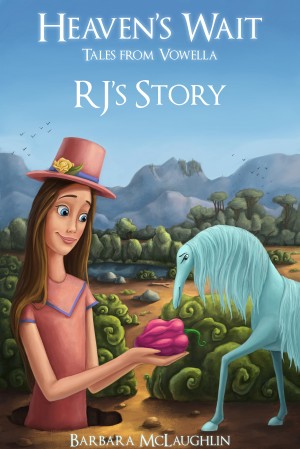 Beyond our realm, in the world of Heaven’s Wait, a community of oddball, animated beings, the Vowellans, live with innocent hope that someone called their Angelicous will someday arrive to help them realize their destiny.

With questions of his own, a recently deceased earthly man, Robert James, decides to travel an adventurous route to Heaven. During his flight, he gets tangled in a wild storm that captures his small plane and delivers him to Heaven’s Waits’ Vowella Valley, the storm-devastated home of the Vowellans.

Once RJ discovers the comical, quirky clans of Vowella: the jolly Ham Bats; the greedy Net Kens; the quiet Fig Wigs; the intelligent Fog Bobs; and the rowdy Rug Bums, along with a few familiar faces from his past, he begins a new life journey, one of surprise, discovery, challenge, sharing, and hope for a clear sense of purpose for all.

Barbara McLaughlin was born and raised in the San Francisco Bay Area, where she currently resides. She studied Early Childhood Education and worked in the field of education for several years before taking time out to raise her two sons. During that period, she not only helped her husband build their family-owned coffee roasting company; she self-published her first book, a remedial reading workbook filled with simple stories and quirky animated characters. When she lost her father to a terminal illness, however, her creative spirit faded, and she abandoned the project.
Barbara directed her energies toward family and business for almost twenty years. All the while, her creative side continued to call to her. She eventually resurrected the animated characters that had been central to her remedial reading workbook and began to write a collection of life-lesson tales for her family. She didn’t know her creative journey would lead her to fascinating places she never expected to explore or that she would become an accidental novelist during the process.
As the tales slowly morphed into a larger story, five main characters rose to the surface, as did the associated memory of her father’s passing. Barbara found it fitting to create a character based on her father to bridge the gap between the world we know and the unlikely characters’ new world, which became Heaven’s Wait.
Since then, whenever she has found time away from family and work, Barbara has immersed herself in expanding the world of Heaven's Wait. Aside from work on her in-progress 7-part book series, she has further challenged her creativity with musical composition, product development, and visions of a HW book series for young children. The flowering of her fantasy world has been her constant joy, and she finds her rewards in the knowledge that there are now believers in the magic of Heaven's Wait.

About the Series: Heaven's Wait! Tales from Vowella

Somewhere beyond, in a world called Heaven's Wait, the tiny community of Vowella lies hidden and isolated from other life forms. Its quirky and endearing inhabitants, the Vowellans, believe they are destined to serve a purpose in their colorful world, but they have no clues to lead them to such discovery. A couple of intuitive Vowellan teens, accompanied by their accidental earthly mentor, a kind soul by the name of RJ PLOM, embark on a journey to solve the mystery of the Vowellans' destiny. They discover that they will never find an answer to their biggest question until the flaws and struggles that plague us all, human or otherwise, are brought to light. These are the stories of their journey.

You have subscribed to alerts for Barbara McLaughlin.

You have been added to Barbara McLaughlin's favorite list.

You can also sign-up to receive email notifications whenever Barbara McLaughlin releases a new book.