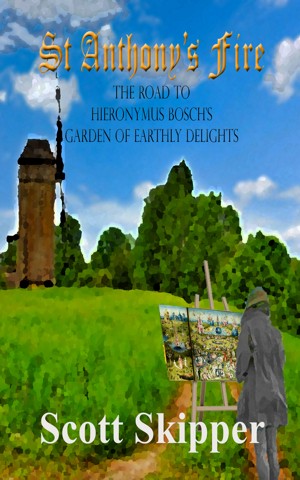 Around the turn of the 15th century, a Dutch Master called Hieronymus Bosch painted a very strange painting. According to modern thinking, it is perhaps psychedelic. It is a triptych depicting the Garden of Eden, earthly delights, and Hell. Virtually nothing is known about the man known as Hieronymus Bosch. St. Anthony’s Fire explores some possibilities to explain the man and what drove him to pai More
This highly fictionalized look at an obscure Dutch artist is meant to be tongue-in-cheek. It creates a loveable character who flip-flops between sin and righteousness. He is an extraordinarily gifted painter, but he paints under protest. Of the few facts actually known about him, one is that as a boy, he almost certainly witnessed the burning of his birthplace, Hertogenbosch, in what is now the Netherlands. One of the other is his marriage to Aleid Goyaerts van den Meerveen. Heironymus Bosch’s birth name was Jeroenimus Anthonissen van Aken, we will get to know him as Jeroen.
Available ebook formats: epub mobi pdf lrf pdb txt html
Price: $4.99 USD
Buy Add to Library Give as a Gift
How gifting works
Create Widget
Tags: humor art painting pilgrimage netherlands santiago de compostela true biography spain history garden of earthly delights heironymus bosch
About Scott Skipper

Because Shakespeare’s letters are as rare as hens’ teeth, some say to know the man, read his plays. About a century before the Bard, across the English Channel in the Netherlands, a painter put oil on wood but left little information about his life. One could say the same thing; to know the man, study his paintings.

Faction is an historical novel rooted in fact, where a real person or event is used in fiction. Hieronymus Bosch, a real person, was a Dutch/Flemish painter in the 15th century famous for producing remarkable works of art. Religious themes dominated and nudity often featured in his paintings as did animals in surprising situations such as birds flying out of a human’s rectum.

St Anthony is the patron saint of lost causes and when people caught Erysipelas, a nasty skin complaint caused by eating bread made with contaminated flour, the disease was called St Anthony’s Fire.

Bosch caught the condition which brought on great physical pain – he lost some toes – but also suffered vivid nightmares or visions. These mental apparitions inspired his remarkable paintings.

In Scott Skipper’s novel, a couple of Spanish teenage boys visit an art gallery in Madrid today and laugh at the sight of Bosch’s art. A gallery guide takes it upon himself to educate the boys about the life and work of the artist.

We then travel back hundreds of years and meet Bosch and learn about the man. He’s in his twenties, religious, is recovering from St Anthony’s Fire, and painting. He and some fellow travellers (pilgrims) set out to walk, that’s right, walk from Holland to Spain via France and the Pyrenees.

From adventure to adventure he goes, his life experiences being dramatic, joyful, tragic and inspiring. Throughout the journey, we pop back to 21st century Madrid where the two teens make comments and ask questions, and the long-suffering but wise guide relates the next chapter in the painter’s life.

One test of an historical novel is that it captures the nitty-gritty of daily life of the period. Skipper’s novel does this and more. His vision of Bosch brings the painter to life revealing his inner thoughts, personality and dreams. The novel’s details breathe life into the journey as the reader joins the pilgrims en route. You are there with the characters, and your knowledge of art and disease will increase overnight.

You have subscribed to Smashwords Alerts new release notifications for Scott Skipper.