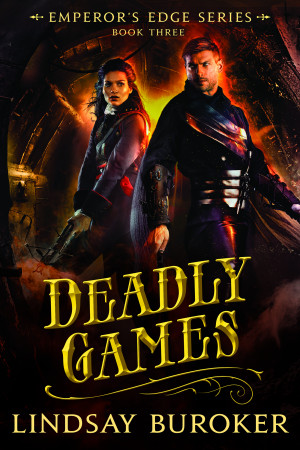 By Lindsay Buroker
Rated 4.85/5 based on 13 reviews
When you’ve been accused of kidnapping an emperor, and every enforcer in the city wants your head, it’s hard to prove yourself an honorable person and even harder to earn an imperial pardon.

That doesn’t keep Amaranthe Lokdon and her team of outlaws from trying. When athletes start disappearing from the Imperial Games... More
When you’ve been accused of kidnapping an emperor, and every enforcer in the city wants your head, it’s hard to prove yourself an honorable person and even harder to earn an imperial pardon.

That doesn’t keep Amaranthe Lokdon and her team of outlaws from trying. When athletes start disappearing from the Imperial Games, they may finally have an opportunity to show the emperor that they’re on his side. If she and her comrades can get to the bottom of such a public mystery, they’re sure to get the credit.

But plans go awry when Amaranthe’s own men start plotting against each other, the new ally she’d hoped to acquire tries to turn her in, and her best fighter—and closest friend—disappears.

Maybe getting involved wasn’t such a good idea after all…

Review
E.S. Quoika reviewed on Sep. 27, 2013
(no rating)
Cannot open file in aldiko or kindle app. Loving the book, but not so happy about having to read it in the web browser.

Interesting aspect for the continuence of the series....

Yet another wonderful book in this series!
I'm looking forward to read the next one.

Another great read from the Emperor's Edge series. This time the spotlight is on Basilard, and he's got a difficult moral dilemma. There are more exotic monsters to battle, and a villain from the first novel reappears (I really hoped he'd died!), although in new company. One of the things I like about the series is that the characters develop and grow in each subsequent novel. Looks like the team is finally making headway in getting into the Empoor good books, although their task is far from complete.

Great book, can't wait for the next one. Hopefully it will be longer! I really enjoyed the books but they were over much too soon. Thanks for writing an awesome book Lindsay!

Great book to continue the series, though I missed Sicarius during the middle of the book, but the ending somewhat made up for his disappearance! I have to say that some of the plot twists seemed a little convoluted and left me a bit confused, but the character development compensated. Perhaps it'll take more than one very speedy reading of it to get some of the layers: I was too busy wanting to know how things were going to progress between Amaranthe and Sicarius!

I love love love this series. I love how Amaranthe can talk people into doing whatever she wants, I love how Sicarius is gradually developing a sense of humor, I love how Amaranthe has whole conversations with Sicarius with his only involvement being the twitch of the brow. I love the pace of the series, Lindasy Buroker times the progression of the relationship perfectly with a little more in each book. And just as I was wondering what was going on with Sespian - there he is at the end of the book. I can't wait for the next instalment.

I loved this book! The series is completely amazing! I'm anxiously waiting for the next book....PLEASE HURRY!!! :)

I'm not sure I can accurately describe how much I love this series. Lindsay Buroker nails it again in the third instalment. This edition is easily as cinematic as the previous two. You could transcribe it word for word onto the big screen and hold me riveted.


These characters continue to grow and endear themselves to me. Funnily enough, the character that struck me as the most changed was Maldynado. He really has become a rather loyal fellow who looks out for... well, Amaranthe, but there were several "Aww, the big softie" moments. I think he is acting more and more like her big brother (albeit one that doesn't get possessive or expect her to be chaste - we can leave that to Sicarius).

Akstyr worries me. He is useful, but I don't think he has formed the type of bonds for Amaranthe as the others have. She is the glue that holds them together, and he isn't quite as attached. I think when we get his point of view, we might see things differently, but I am expecting a surprise from him.

Amaranthe continues to be a lady to admire. She doesn't have to resort to seduction or lies to convince people to join her cause. Her humanity and passion do that. But I see a few cracks of doubt appearing here and there, which should open some interesting discussions going forward. I'd actually like to see how Sicarius might deal with her moments of doubt. She's always kept such a positive face for him. Especially since he is depending on her planning to bring him... well, potentially two rewards now.

Basilard was 100% correct. Amaranthe humanises Sicarius. But then, she brings the best out in each member of that team. I'm glad Basilard did not go through with his plan.

That epilogue was brilliant (as was the scene preceding it, but I truly do not want to spoil it for everyone who SHOULD be reading this book). What a brilliant tease for the next chapter in this series, which I hope I won't hound the author for too much in the coming months.

Bottom line: Awesome storytelling. Engaging and unique characters. Flawless eBook. On my top ten list of books I've read in 2011 (which also includes the other two). Must read.

(reviewed 27 days after purchase)
Dreaming Robot Press reviewed on Dec. 7, 2011
(no rating)
Great fun! Can't wait for the next one!