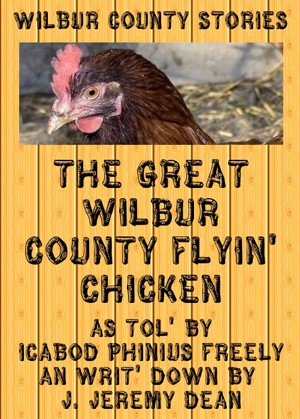 By J. Jeremy Dean
In this here story, two youngins take it into their minds to see just how far a chicken can fly if thrown off the top of a corn silo. It’s not pretty, but it’s pretty funny. More
Welcome to Wilbur County. My name is Ichabod Phinius Freely, and I guess you could say I’m the county historian, or if that’s too prettytentious for you, just say I’m the unofficial chronicaller of significant happenin’s round these here parts. As a life-long resident of Wilbur County, I was around when most of the good stuff happened. I’m talking about real important stuff like the infamous flying chicken that is writ down in this here tale.
As a word of warnin’ to you, this story contains robbin’, and bettin’, and violence, and the abuse of innocent farm animals. If you are offended by any of this, rather than getting’ mad at me for somethin’ I did when I was too young to know no better, I suggest you find a different story to read. If you’re okay with all of this, shame on you, and I hope you enjoy the story.

J. Jeremy Dean was born at 6 a.m. on a Saturday morning, just in time to watch cartoons, which might explain why his first story, written in third grade, was about small fuzzy invaders from a distant world. He has since branched out from science fiction into humor, horror and fantasy writing as well as the occasional love songs for his wife. He has completed two screen plays and two novels, but only one of each turned out very good.

He wrote for and edited newspapers for six years. During that time he won an award from the Florida Society of Newspaper Editors for writing about how bad a few movies were. However, when he went to collect it he became lost and was nearly arrested for trying to enter a restricted area of Cape Canaveral Air Force Base. Conveniently, the award was later sent to him in the mail.

He has traveled all around the continental United States, and in his travels he has discovered a great many interesting things. For instance, if you can afford to live on earth, Southern California is the perfect place to do so, with its soaring mountains to the east and its pristine beaches to the west. Arizona, on the other hand, looks nothing like it does in those old western movies, and the majority of saguaro cacti are quite asymmetrical and ugly. Tennessee has the country’s most beautiful autumns, and Florida its the most beautiful winters. Also, they no longer serve free beer at Bush Gardens, and pirates probably weren’t as cool during their own time period as they are right now.

Though he has traveled far and often, he has never been out of the country. During a trip to Detroit, he and his wife tried to cross the boarder into Canada, but were turned away because they didn’t have enough change to pay the bridge toll. Even though they didn’t technically get into the other country, customs had to run a checked on their trunk before they could leave the bridge, just in case they bought anything illegal while waiting in the toll line.

If pressed, he can recite in their entireties, both the story of Alice’s Restaurant, and all the dialogue and songs from the movie Beetlejuice. If he could have written anything that he did not actually write, it would have been The Hitchhikers Guide to the Galaxy. If he could be anyone he is actually not it would be Batman. His favorite color is green. 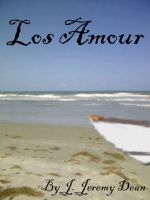 You have subscribed to alerts for J. Jeremy Dean.

You have been added to J. Jeremy Dean's favorite list.

You can also sign-up to receive email notifications whenever J. Jeremy Dean releases a new book.