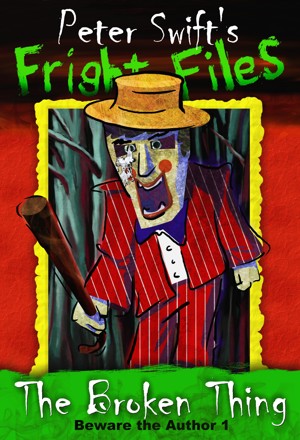 Stevie Barton loves a scary story, until he finds himself living one! Two days before Halloween in Newhope, Vermont, Stevie takes a mysterious antique toy he finds abandoned in the spooky forest the townspeople call The Grove. Now, something wicked wants it back.

Along with his best friend Angie Lewis, Stevie must find and stop the horror before it finds him. More
Middle-Grade, Ages 9+

Stevie Barton loves a scary story, until he finds himself living one! Two days before Halloween in Newhope, Vermont, Stevie discovers a mysterious antique toy sitting in the spooky forest the townspeople call The Grove. He pockets the abandoned toy, but a local bully drives him deeper into the dark forest. Soon, Stevie learns that the bully is the least of his worries. Something evil slept in those dark woods, and he woke it. Now the evil is after him!

Love a good, scary read? Peter Swift is the author of Fright Files, exciting middle-grade supernatural horror novels for the young and young at heart. After all, young hearts make the best sandwiches!

"I love writing scary stories for kids because that's what I loved to read when I was a kid. Still do!"

Peter Swift grew up in a small town outside of Philadelphia. He was surrounded by ancient places steeped in legend, mystery, and myth. Dark forests, abandoned houses, and overgrown cemeteries were a very real part of Peter’s childhood adventures and explorations, and his imagination often populated these places with magic, ghosts, and monsters, both light and dark.

Reviews of Fright Files: The Broken Thing by Peter Swift

In short: Stevie likes horror movies and books…but when he discovers a real haunted house and a real haunting, he chickens out and has to be dragged into finding out more by his best friend, Angie. What they discover is a threat to their lives and the ones they love.

Stevie, a big horror movie and book fan, is also the victim of bullies in Nohope, Vermont. The bullies chase him into some woods that are supposed to be, if not haunted, then at least too creepy to be running around in. While there, Stevie finds a broken doll-thing that almost seems to move in his hand–the doll is later stolen by the bullies. Soon afterwards, Stevie’s mom gets into a car crash (she doesn’t die) trying to avoid a ghostly, broken-looking girl in the middle of the road…a girl who wants to get back something that was stolen.

Stevie and his best friend Angie, another horror fan, find out that the ghost used to be a girl who lived at a house just past the creepy woods…a girl who supposedly murdered her whole family, then killed herself. Stevie’s teacher doesn’t believe in ghost stories (but likes local legends), yet recommends they talk to his dad, who has a different, even scarier opinion of the old house…

Okay, admittedly, with Goosebumps, sometimes you just have to laugh. Some of the situations that people get into are just too funny, especially when compared with adult horror movies. The Broken Thing, however much it may go in the Goosebumbs category, provides a few more chills than that. What makes the thrills just slightly annoying is that there are so many cliffhangers that lead to fake-outs–it wasn’t the monster sneaking up on them, it was only his sister! kind of things. But that’s a minor quibble. The characters were fun, the action exciting, and the slow parts tinged with creepiness. A couple of silly moments…but sometimes you just have to have a little cheese with your screams.

You have subscribed to alerts for Peter Swift.

You have been added to Peter Swift's favorite list.

You can also sign-up to receive email notifications whenever Peter Swift releases a new book.