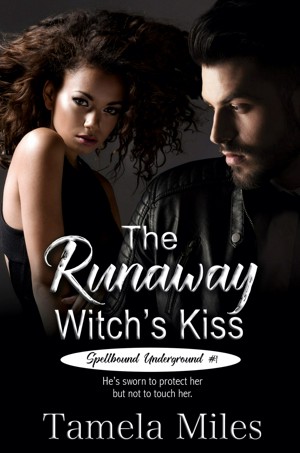 By Tamela Miles
He’s sworn to protect her but not to touch her. With danger coming for them, can he keep his promises, especially the hands off one? More
Nahla Gregory is a witch on the run from a bad domestic situation. Tomas Castillo, a warlock, has a prepared safe haven for her, while dealing with his own problem, his neutered magickal powers. He’s sworn to protect her and to keep his hands off her, but Nahla is downright tempting. Danger is coming for them and combining their powers may be the only way to survive the storm. Can Tomas keep Nahla safe, as promised, while she helps him rediscover his long forgotten magick?

Tamela Miles is a California State University San Bernardino graduate student with a Bachelor of Science degree in Child Development and a former flight attendant. She grew up in Altadena, California in that tumultuous time known as the 1980s. She now resides with her family in the Inland Empire, CA. She's a horror/paranormal romance writer mainly because it feels so good having her characters do bad things and, later, pondering what makes them so bad and why they can never seem to change their wicked ways.

She enjoys emails from people who like her work. In fact, she loves emails. She can be contacted at tamelamiles@yahoo.com or her Facebook page, Tamela Miles Books. She also welcomes reader reviews and enjoys the feedback from people who love to read as much as she does.

You have subscribed to alerts for Tamela Miles.

You have been added to Tamela Miles's favorite list.

You can also sign-up to receive email notifications whenever Tamela Miles releases a new book.