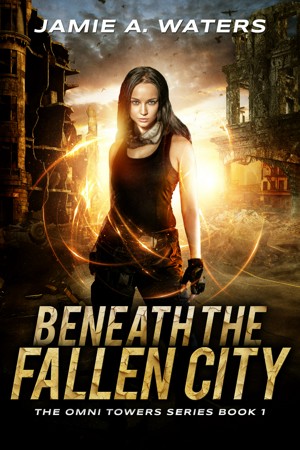 Beneath the Fallen City (The Omni Towers, Book 1)

By Jamie A. Waters
Rated 4.00/5 based on 2 reviews
Beneath the Fallen City is the first book in an exciting post-apocalyptic fantasy series with romantic elements and shocking twists. Join Kayla as she unearths the secrets of the past and discovers a hidden world no one thought was possible. More
**Winner of the Readers’ Favorite Award for Fantasy & Science Fiction Romance**
**Winner of the Colorado Independent Publisher’s Association’s EVVY Award for Science Fiction**
**Global Ebook Awards Honorable Mention for Science Fiction**

Some secrets are better left buried...

Kayla is a scavenger, driven to search the ruins of abandoned cities for artifacts in exchange for critical life-saving supplies. But, the rarest artifacts are found in the most dangerous ruins—those under control by the OmniLab traders.

Carl is one of those traders—and Kayla’s invaded his district. He’s determined to stop her and the best way to do that is to recruit her. The only problem?

When a powerful man intent on revenge starts hunting her, Kayla realizes the only way to save herself may be to accept Carl’s offer. But that would mean surrendering to OmniLab and giving up everything she knows.

Only everything isn’t quite what it seems.

Jamie currently resides in Florida with two neurotic dogs who enjoy stealing socks. When she's not pursuing her passion of writing, she's usually trying to learn new and interesting random things (like how to pick locks or use the self-cleaning feature of the oven without setting off the fire alarm). In her downtime, she enjoys reading on her Kindle, playing computer games, painting, or acting as a referee between the dragons and fairies currently at war inside her closet.

Learn more about Jamie A. Waters

Official Book Trailer for The Omni Towers Series
Book one in a series: On a ravaged Earth, Kayla survives by using her uncanny ability to locate tradable artifacts in the rubble. But when someone starts hunting her, she’ll be forced to team up with her biggest rival… A riveting dystopian adventure with a supernatural twist!

About the Series: The Omni Towers

The Omni Towers is an exciting, award-winning dystopian fantasy series with romantic elements and shocking twists. Join four very different women as they unearth the secrets of the past and discover a hidden world no one thought was possible.

Also in Series: The Omni Towers

Reviews of Beneath the Fallen City (The Omni Towers, Book 1) by Jamie A. Waters

I really liked it.

This story is called post-apocalyptic by the author and in a way it is. They are on a planet (presumably not earth) where there once was a civilization, most of which has collapsed. There are still two towers remaining and lots of underground ruins. It is very different from most of the post-apocalyptic stories on this site fro the following reasons: 1) A form of civilization holds. 2) people don't automatically shoot each other on sight. Murder is still a crime and not a way of life. 3) The dialog is more realistic. 4) People still understand why there are male and female humans and continue to have love and lust.

Unless you read the blurbs for later books in the series, you continually learn more about the main character as you go thru the story. While there are scavenger gangs like most post-apocalyptic stories, they are not the main focus of the story although the first half of the book it seems like they are. It isn't til the 'great revelation' about the main character that the focus shifts to the power grab by someone in the tower. He has been holding illegal power over the remains of civilization via a form of mind control and attempts to control the main character also.

This was published at a time where it may be possible that the parallels with our own situation are intentional. We have a situation where a would-be tyrant is attempting to take over our country and abolish democracy via mind control. In our case the mind control is via lying news organizations, social media trolls (many of them in the employ of foreign dictators) and misinformation rather than psionic devices, but the parallels are interesting.

The story is fairly realistic, other than the psychic powers. I didn't understand why the ruins are underground while the surface seems to be a barren gravel desert but that's a physically possible. I once started a story (never completed or published) with the same sort of setting but went to some lengths to explain how it got that way.

There are clean and consensual sex scenes in the story, the proofreading is good. Not a shot is fired but there is a big psionic battle in which two people die. There were murders in the past and an attempted one in here in which the perpetrator dies. Most of the romance conventions are followed, especially over-protective males but some are not such as a consummation long before the last page and a triangle that is not resolved. There is a preview of the next book in the series and it is enough to show that it is not going to be only more of the same.

All in all this was a great relief from the usual post-apocalyptic bloodbath.

You have subscribed to alerts for Jamie A. Waters.

You have been added to Jamie A. Waters's favorite list.

You can also sign-up to receive email notifications whenever Jamie A. Waters releases a new book.