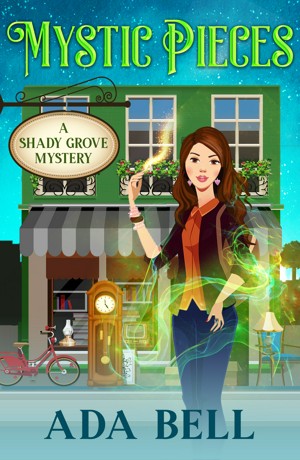 By Ada Bell
Rated 4.00/5 based on 1 reviews
Aly doesn’t believe in psychics. Too bad she just had her first vision.

Her first instinct is flat-out denial. After all, science and magic don't mix. But when a man is murdered, Aly realizes that she may be able to use her strange new "gifts" to find the culprit. If she can avoid getting herself killed in the process. More
Aly doesn't believe in psychics. Too bad she just had a vision.

Aly’s got enough on her plate, with finishing her degree and taking care of her nephew and starting her new job at the antique store while drooling over the owner's gorgeous son. No time for visions.

Alas, the universe doesn't care what Aly believes. When she turns 21, she starts to feel psychic impressions left on objects. A disorienting power for someone surrounded by antiques. Then cranky customer Earl is killed, and Aly's new boss Olive is the prime suspect—not to mention the only person who understands Aly’s gifts. Who hated Earl enough to kill? Police would rather make a quick arrest than investigate, so it's up to Aly to clear Olive's name.

Shady Grove is reeling from the first murder in decades. If Aly can get her hands on the right object, she'll know what happened. Can she learn to control her visions before the killer sets their sights on her?

Since I first heard about this book I was looking forward to reading it. I've read some of this author's books under her other pen name and was excited she was branching out into cozy mysteries. Mystic Pieces was a solid start to this new series, introducing the town, the characters and the main character psychic powers. I really enjoyed it and look forward to future books!

In Mystic Pieces main character Aly has recently moved to Shady Grove and is planning to finish her degree in a city close by. While looking for a job she stumbles upon an antique store that's hiring and she has her first vision there. Shortly after that she get involved in a murder mystery as well. I liked reading about Aly and how she dealt with everything going on. It had a nice mix between mystery, while also getting to know some of the characters and the town as well as learning more about Aly's new powers.

This one had a solid mystery. I liked how Aly got involved as her boss was the main suspect and how she used her logic inclined way of thinking to work through the mystery. I wasn't sure who had done it and kept going in different directions and motives. It wasn't a big surprise who had done it, but there were some nice twists and I liked how it all made sense. The addition of Aly's powers and how those intertwined with her solving the mystery was great too. I was happy with how natural some of the developments felt and not too forced. There are some coincidences, but the way it happens makes it feel realistic instead of forced, which was great.

I liked Aly as a main character, with her science background and logical way of thinking. I sure felt for her when she discovered her psychic powers and it made sense how she didn't want to believe it at first. I am glad her doubt phase didn't last too long and I liked how she used some experimentation to figure out more about her powers. She was a likable main character and I liked how she went about things in a smart way, but also could be a bit impulsive at times.

There is a fun cast of side characters and I liked how the author gave all of them enough personality that it was easy to remember who was who. I liked getting a feel for the town and the side characters and I look forward to reading about them more. I especially liked Olive, Aly's boss. There are some possible love interests for Aly as well and I am curious to see how that develops. I also liked the hint of another mystery for Aly to solve about Katrina's death and I wonder if that will be the next book.

Most of the paranormal cozy mystery books I read have witches as the main character, so it was refreshing to read about a psychic in this one. I liked how Aly tried to use her powers to solve the mystery, but also had to figure out how it all works. I hope to see more about her powers in future books.

To summarize: This was a solid start to this paranormal cozy mystery series. I had fun reading this one. I liked the inclusion of Aly's psychic powers and how she tried to use them to help solve the mystery. It made sense how she got involved and how she went about figuring out who had done it. And I liked how natural and realistic instead forced some of the coincidences felt. The mystery kept me guessing, although the murderer wasn't too big of a surprise there were some nice twists along the way and I was never quite sure who the murderer was. I liked Aly as a main character and reading about her and her powers. I liked the side characters and how each had their own personality that made it easy to remember. All in all I really enjoyed this book and look forward to the next book in the series!

You have subscribed to alerts for Ada Bell.

You have been added to Ada Bell's favorite list.

You can also sign-up to receive email notifications whenever Ada Bell releases a new book.