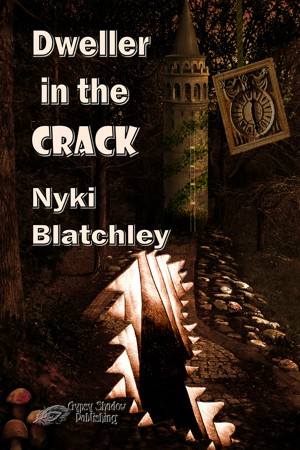 Dweller in the Crack

By Nyki Blatchley
A vanished city, a terrifying future and the mysterious Dweller in the Crack—with only two occasionally competent teenage sorcerers to save the world. More
Kari and Fai, wandering teenage sorcerers and lovers whose spells occasionally work, just want to relax in the city of Jayen—only it's vanished. Things just get weirder when they learn from a child goddess that the city's been catapulted thousands of years into the future, and they need to follow it with her to avert disaster.

Nyki Blatchley is a British author, poet and copywriter who lives just outside London. Alongside a varied career that's involved selling books to royalty, care for disabled people and posing for artists, he's had about seventy stories published by, among others, Penumbra, Daily Science Fiction and The Thirteenth Fontana Book of Great Horror Stories. His novel At An Uncertain Hour was published by StoneGarden, and he's had novellas out from Musa Publishing and Fox & Raven.

Nyki is an administrator for the online fantasy writers’ group Fantasy-writers.org. He's also had numerous poems published and has performed poetry and music at various venues around London. This included frequent appearances at the legendary coffee-house Bunjies, which in the 60s hosted artists such as Bob Dylan, Paul Simon and David Bowie.

About the Series: Annals of Sorcery

Also in Series: Annals of Sorcery

Reviews of Dweller in the Crack by Nyki Blatchley

You have subscribed to alerts for Nyki Blatchley.

You can also sign-up to receive email notifications whenever Nyki Blatchley releases a new book.