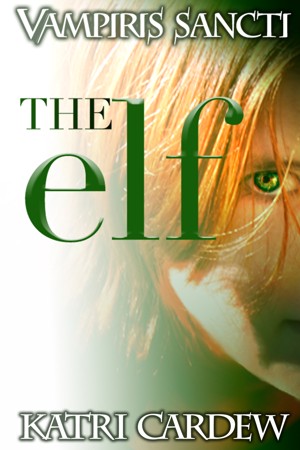 Her foray into this new world has her in the midst of strange political factions, bandits, and Vampire schemes while attempting to protect the vulnerable humans. The unrelenting pursuit of her by an obsessed demon brings the world to the brink of invasion by demon Raiders led by his scorned bride. As Zyre faces the actuality of power within the universe while she struggles with the notion of friendship, loyalty, the reality of her world, the choice of whether to pursue the dangerous decision of revenge, or give into the obsessive love of another.

This is the third amazing novel that I have read in the Vampiris Sancti series.

I utterly love how the author vividly displayed the realm of the magical creatures and their dysfunctional society. Without rules & polices their world didn't become turbulent like it could become if our society were without restrictions, we would certainly run rampant and harmony could not exist under such terms in our world. In the magical realm Elf, Fairy, Pixie, Gnome and Goblin, are creatures of mischief and mayhem without direction or form with antics that make this tale all the more amusing to read.

The Elf realm is the opposite of that of the Demon one and before the mystical sorcerers called the "Mages of Sor", casted an unbreakable spell of the "Seal of Sere" the Demons would bring discord and intrude among the Magical Realm in the effort to exploit these beautiful creatures.

Zyre leaves this mystical realm after being notified by a Pixie named Beb that the Elders wanted her to marry the Demon Prince Vryn Dhaigre. She flees her world to hide within the multiverse away from the Elders in the hope to escape such a life bonded to a demon.
She keeps a low profile not to attract too much attention but continues to cause mischief where she sees fits.

She becomes intrigued by an unveiled vampire, caught between her human past and demon future Zyre follows her curious to find that there are a number of parties interested in Siah. Zyre is interrupted from her findings by a fairy with word from the Elders asking that she present herself to the Martyc who requested union with her to prevent danger to her kind.
Zyre plans to evade marriage while the Demon Prince plans on lure her in but who will prevail if any?
With demon Raiders led by the scorned bride Taryst Janeb and the ever developing sentiments of Zyre anything is possible.

The author has an imagination much to be admired with writing skills to match. If you have read any of the novels from the Vampiris Sancti series you will find that they intertwine with each other from the view of the main three creatures involved, Vampire, Demon and Elf allowing the reader to fully immerse into all three for the full effect.
This is the perfect book for people who want to retreat into paranormal fantasy.

I bought this book due to a recommendation from a friend and I must say that it went far beyond my expectations. I've always loved fantasy books and am usually quite critical to most but there wasn't really anything at all that I didn't think went well in this book and that I would have changed. The backgrounds of all the different races and characters are really original and their interactions and relationships with each other also make for some great scenes. I particularly enjoyed the histories behind all the characters and how they played into the history of the setting, there's a solid background throughout that really makes the book very enjoyable and detailed. I'm very glad I made the decision to follow up on my friend's advice

(reviewed the day of purchase)
Monica Taboada reviewed on May 24, 2013

I really enjoyed Vampiris Sancti: the elf, which turned out to be a great deal for only 99 cents! The book takes us into a world intermixed with humans, elves, demons, goblins, vampires, and other magical creatures. Zyre, the elf, is a very unique character that gets herself in all kinds of trouble despite her wishes to remain unnoticed. By their own nature, elves are constantly causing mayhem so it isn't too surprising when trouble finds her. The author's portrayal of elves and other magical creatures is truly innovative and different than from what I have read before. Elves, for example, have four unique skills to help them survive the dangerous world. Elves appear to be distant and lack empathy but in truth they need to protect their potential fragile emotions. Elves are always looking for new thrills and the heroine Zyre is no different. It is very interesting to see the human world through the inquisitive and innocent eyes of Zyre. The world portrayed was fascinating and the story left me wanting to discover more about this world the author has constructed. I am looking forward to reading the other books as well.

“The Elf” is the second novel I’ve read in the “Vampiris Sancti” series, but I definitely think I should have made it the first! I read “The Immaculate Adventures of One Florian Ribeni” first, and I won’t hesitate to say I was confused by all of the different species, their social structures, and characteristics—trying to keep Vampires, Pixies, Elves, Goblins, Gargoyles, and more straight took some work.

“The Elf,” though, lays out all of its different characters in context—at the beginning of each chapter, there’s a mini-history and explanation of all of the different species, and some of the entries build in complexity and detail throughout the novel. You learn about Elves and their nature, Demons and their nature, etc. As a person who really enjoys detailed fantasy worlds, all of the extra information appealed to me and helped me to understand the characters and the overall world much better.

This novel’s main character is Zyre, the mischievous elf that you briefly meet in “Florian Ribeni,” and as the book begins she’s worried that she will be matched by the Elders with a demon prince, Lord Vryn Dhaigre. Elves mate outside of their species in order to have more powerful children, but female Elves are often unwilling to enter into marriage with a Demon—Demons are obsessive and demanding, consumed by love, and Elves cherish their freedom and find it torture to be tied down.

Instead of accepting the fate decreed by the Elders, Zyre decides to flee, with the demon prince in pursuit. She gets tangled up with Vampires, humans, and other magical creatures, weaving between worlds and dealing with her own growing emotions as well as with the demands of friendship and the heartbreak of betrayal. The plot is intricate and hard to summarize beyond that, but it’s fairly easy to follow once you start to recognize the different character names and species.

I actually enjoyed “The Elf” better than “Florian Ribeni,” only because I found Zyre a more sympathetic and relatable character—though she starts off a little distant, as she grows throughout the novel in emotional depth, the reader’s attachment grows as well. The novel ends on an open note, leaving room for more of Zyre’s adventures and explorations, and I will likely read others in the series to see what becomes of everyone.

Recommended for those who enjoy fantasy novels with detailed worlds and more complex plots.

Those of you that are fans of a magical world then this is a book that you will want to read. With Elves, Pixies, Demons, Vampires, Orics and much more to keep you busy following Zrye through this magical world.

This is the story of Zrye, a beautiful Elf, who journeys to the world of humans to hide from an arranged marriage. It seems the Elders are going to marry her off to a Demon, and Zrye decides to hide. Where else but on a world she has never been to, the world of humans

Although this book is the story of Zrye the Elf, we also get to meet Florian Ribeni and Beb the Pixie friends of Zrye. Florian and Beb's story are told in Vampiris Sancti: The Immaculate Adventures of One Florian Ribeni

Little does Zrye know that when she tries to escape the Elders wishes, the world she comes to is the one that the Demon who wants to marry her controls. While there Zrye learns what friendship, love, desire and betrayal are all about..

She also has to learn to deal with Vampires and all the rules that they live by. For the cat lovers there is even a magical creature in the story called a cat who lives in the Vampires House. The cat ends up being a huge part of the story.

This book is a wonderful adventure in to the realm of another reality. You are taken on a magical journey through the veil that separates the physical world from the magical world that exists on the other side. This is not a light book that is full of fluff. This book has characters, a love story, action, humor and much more that will pull you into the story.

One of the things I like about this book is that the author takes the time at the beginning of each chapter to explain the characters and their abilities. It takes a little getting used to because you are reading the story and at each new chapter you learn about the characters powers and abilities.

Once again Katri Cardew has written a wonderful story that is more then worth the money.

Cardew attempts at a worthwhile read but falls short. The plot is overly convoluted with too many characters to grab onto. The picture she paints is adequate but the plot drags tediously. Unless your preferred genre is goth fantasy, then save your time and money.

Though I am eager to read the second of this trilogy, I am not anxious to deal with the long encylcopedia-like/history of... at the beginning of each chapter. Once into the action of the book, it is quite enjoyable. The problem is that every single chapter breaks up the action of the story as the each chapter is broken into 2 parts. The encyclopedia takes up several pages at the beginning of the chapter while the story itself is the second half. It causes a disjointedness to the action that I didn't really enjoy. Also, I highly recommend using the glossary of many, many pages at the end, which I unfortunately did not discover until almost the end of the book since it does not have its own section in the table of contents. If you can get of the boring encyclopdia/history of... at the beginning of each chapter, I recommend it.