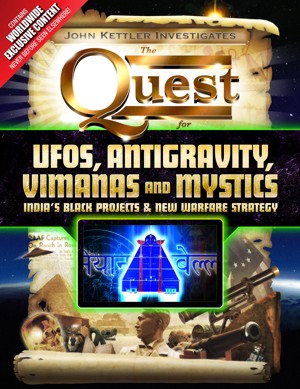 By John Kettler
What do ancient Indian sacred texts and terrified Tibetan mystics have to do with Stealth technology, antigravity projects and a new Indian warfighting strategy—let alone the ongoing clashes between India and Pakistan in long-disputed Kashmir?

Find out in John Kettler's revelatory new E-book. It may well redefine the way you look at reality. More
What do ancient Indian sacred texts and terrified Tibetan mystics have to do with Stealth technology, antigravity projects and a new Indian warfighting strategy—let alone the ongoing clashes between India and Pakistan in long-disputed Kashmir?

What will happen when India’s strategic bluff is revealed to the surprised world, an outraged Indian public and a delighted Pakistan?

What 2010 Afghanistan discovery has confirmed that the “mythical” Vedic accounts of aerial battles by the “gods” are real—and that the weaponry involved laid waste to ancient cities and consumed entire armies?

Through extensive research and “Deep Throat” insiders’ perspectives, renowned investigative reporter John Kettler—perhaps the most published author found in the pages of ATLANTIS RISING, with over 50 articles to his credit—uncovers the answers to these compelling mysteries in an easy-to-read, fast-paced, engrossing story.

Join him—in a series of worldwide exclusives—as his investigation leads to one inescapable conclusion after another, and discover hidden truths that are every bit as astounding as they are terrifying. Comprehend matters of "deep politics" so controversial and delicate that complex international relationships could be shattered—and major governments fall—as a consequence of their exposure!

Containing staggering new information available nowhere else, UFOs, ANTIGRAVITY, VIMANAS AND MYSTICS covers—among other things—the mysterious trek to the hinterlands of Afghanistan taken by world leaders during one strange week in 2010.

Did this pilgrimage have anything to do with suppressed news that a recently-unearthed war machine—perfectly preserved, armed to the teeth and still operational after thousands of years—is resisting (at great human cost) every effort to seize it?

Will you be left to wonder whether humanity’s pride in its modern-day achievements is about to be undone by stunning revelations of what our “backward” ancestors accomplished thousands of years in the distant past? Feats that in many ways rival and even exceed our own?

Dare you see for yourself what's not being reported in the evening news—or anywhere else for that matter? Will you open your eyes and mind to the searing facts carefully concealed by a bodyguard of lies, deceit and propaganda? Can you handle truths the public was never meant to know?

If you think you can, don't wait and don't hesitate to read John Kettler's revelatory new E-book, UFOs, ANTIGRAVITY, VIMANAS AND MYSTICS. It may well redefine the way you look at reality.

The son of a defense engineer, Mr. Kettler followed in his father’s footsteps, but in a different way. He became a military analyst for Hughes (Raytheon) and Rockwell (Boeing) in a career that spanned over 11 years and covered threats ranging from commando attacks to orbital antisatellite systems and directed energy weapons.

Since leaving military aerospace, Mr. Kettler earned a primary research credit in the Oscar™-winning documentary “The Panama Deception,” was interviewed for the Vince Foster political murder documentary “None Dare It Call Murder,” has authored some 50 magazine articles on cutting-edge topics, is included in two anthologies, and has appeared on numerous radio shows. He maintains a broad range of interests, including military history, exotic technologies, black programs, UFOs, cryptozoology, secret societies, hidden history, how the world really works and the true powers of the human mind.

The author has lived all over the United States and currently resides in Texas.

You have subscribed to alerts for John Kettler.

You have been added to John Kettler's favorite list.

You can also sign-up to receive email notifications whenever John Kettler releases a new book.