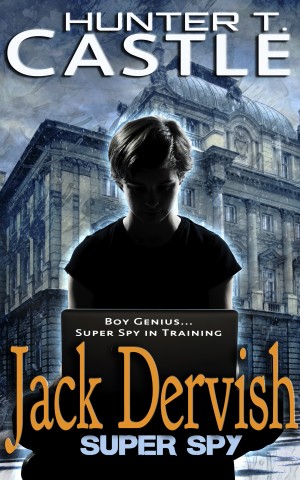 By Hunter T. Castle
Rated 4.67/5 based on 3 reviews
Four-year-old Jack Dervish's super spy parents disappeared without a trace. Now, at twelve, and after years of living in his parents’ super-spy lair, training in every manner of super-spy skills, Jack decides to attend school. After all, how will he foil the international crime syndicate and fight global evil if he can’t even pass as a normal, youngish Londoner? More
Four-year-old Jack Dervish’s super spy parents disappeared without a trace…

…And now, at twelve and after years of living alone in his parents’ super-spy lair, training in every manner of super-spy skills, Jack decides he must attend school. After all, how will he foil the international crime syndicate and fight global evil if he can’t even pass as a normal, youngish Londoner?

Unfortunately, he quickly catches the attention of the Homeland Security Office, along with the meanest bullies at St. John’s Preparatory School. His only hope lies in his new friends, Isobel, William and Squid, and the super spy skills Jack never bothered to test…at least not against actual people.

Action. Adventure. Romance. Will Jack manage to find his parents, save his friends and win the girl? Or will the evil mastermind following him turn him into an enemy of the state? A funny, quirky story with an unforgettable new hero.

If your virtual shelf of smart young reader favorites includes any of today's top junior spy novels alongside the Harry Potter and Lemony Snicket series or anything by Roald Dahl, make room: you'll be putting Jack Dervish, Super Spy right there with them.

Kids and adults alike will empathize with super-smart yet socially awkward Jack Dervish's earnest desire to fit in – which can be pretty complicated when you've been living on your own since you were four and trying to keep the world safe from nasty, vindictive evildoers, some of whom might incidentally happen to be your best friend's father and missing parents' nemesis, as well.

This book is a well-mixed blend of light and dark whimsy in a contemporary UK setting complete with teenage hackers and laptops in the schools. The pages turn themselves thanks to characters you root for, interlocking mysteries, and plenty of way-cool gadgetry and edgy spy-kid action.

Check it out. But be warned: once you're done, you'll likely want more.

In short: After Jack's superspy parents go missing, he hides in their secret lair for years...learning how to be the perfect spy. Now he has to face a terrible challenge: in order to find his parents, he has to to learn how to act like a normal kid.

Jack Dervish's parents disappeared when he was four years old. He was smart enough to hide out in his parents' secret lair under the house, even after new people moved in upstairs. Living off his parents' savings and by using the Internet, Jack survived more or less alone.

But on his twelfth birthday, Jack finally realizes that a) he cannot accept that his parents are dead and b) they aren't going to be able to come back on their own. He decides to go on a quest to rescue them; however, he has no idea where they could be, or what they were involved in when they left (well, he was four).

He decides that the only way to search for his parents is to go into the outside world. And that means...pretending to be a normal kid. After eight years in his parents' secret hideout with nobody to talk to (except for a few people over the Internet), it won't be easy.

Despite making a ton of mistakes (including deciding that "Rasputin" is a good name for a kid), Jack faces down bullies, fools the school into thinking he's from a foreign country, and makes a couple of friends that like him despite his really weird way of doing things.

However, Isobel is one of the worst friends that he could have made; her father works for the Homeland Security Office...and is out to capture Jack and find the truth of where he really lives, and the source of all his gadgets. The thing is, Mr. Spencer knows something about Jack's parents...why else would he have a picture of them?

I had a lot of fun reading this. Jack does not fit in, and that's what fifth grade was all about for me: being smart and not fitting in. If you enjoyed The Mysterious Benedict Society or the Artemis Fowl books, I highly recommend this book. I thought the beginning was a little silly--a four year old living on his own? Really?--but hey, why not? This looks like the start of a fun series. Lots of gadgets, traps, and sneaking about.

Jack Dervish is, quite possibly, the most interesting kid on the planet. Imagine being one of the children from the family in the 'Spy Kids' franchise...only your parents have mysteriously disappeared!

But Jack, being fantastically logical, forward-thinking, and disciplined, reacts by living in his parents’ super-spy lair, learning every super-spy skill, creating fantastical gadgets...

..and realizes that unless he gets out into the world and attends school, he'll be forever alone and isolated. I mean, even Batman needed to get out and visit Gotham, whether as Bruce Wayne or the Caped Crusader, right?

Most stories would then take the tried-and-safe route of making the super-intelligent, super-cool spy kid have to face his biggest challenge: blending in with other kids, dealing with his first crush, etc. OK, there's some of that in this.

But bigger, badder things await, and Jack comes up against an evil mastermind who, in classic James-Bond-villain fashion, wants to take over the world...

...and that same person may just know what happened to Jack's parents!

Fast-paced, fun, and fully engaging, this is a book you have got to read. And I'm already waiting for another!

You have subscribed to alerts for Hunter T. Castle.

You have been added to Hunter T. Castle's favorite list.

You can also sign-up to receive email notifications whenever Hunter T. Castle releases a new book.