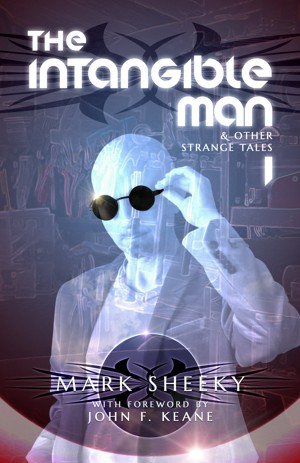 The Intangible Man & Other Strange Tales

Meet George as he discovers a door, magically appearing in his house overnight. Join him in an art gallery to notice his favourite painting changing, ever so slightly, each day. Meet the robot poet, deciding to write his life story on the night before he is switched off. Visit the world where sleep does not exist, where sleep is revered and feared as we fear death, and where the first sleeper is about to awaken.

John F. Keane writes: "The stories in The Intangible Man are a little like those of Jorge Luis Borges – little gnomic parables that leave us questing for their inner meaning. Unlike true science fiction, Sheeky's stories never dwell on their technical or scientific contents but rather focus on some psychological, philosophical or moral theme in the manner of Ray Bradbury or Robert Sheckley. However, the surreal juxtapositions and conceptual tangents that define his writing transcend the limitations of genre fiction, frequently achieving that singular vision which defines the highest literature."

Mark Sheeky (b. 1972) is an award winning artist and contemporary Renaissance Man; an oil painter, music composer, performance pianist, poet, author, broadcaster, and more. His childhood passion was computer game design and programming, composing music on software of his own design. In 2004 he began oil painting and decided shortly after to devote his life to art. Sheeky's primary output as a visual artist consists of highly crafted oil paintings of contemporary surrealism and his work forms part of the British National Art Collection. In 2014 Mark illustrated William Blake's Songs of Innocence and Songs of Experience, and a year later his first novel, The Many Beautiful Worlds of Death, was published.

You have subscribed to alerts for Mark Sheeky.

You have been added to Mark Sheeky's favorite list.

You can also sign-up to receive email notifications whenever Mark Sheeky releases a new book.