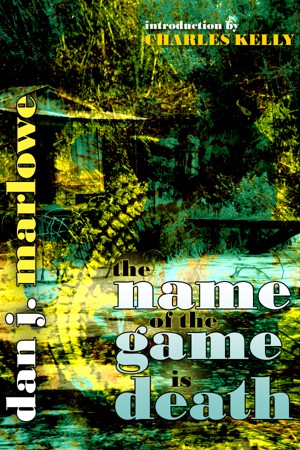 The Name of the Game is Death

By Dan Marlowe
The Name of the Game is Death is a razor-sharp thriller about an amoral bank robber so realistic that it captured the attention of a real bank robber on the run from a fatal bank robbery. More
A rarely-published hard-boiled classic, The Name of the Game is Death is the story of a bloody-minded bank robber who mercilessly tracks down the killers of his partner and does them in. The end of the book carries such impact that horror writer Stephen King, a fan of hard-boiled fiction, said it stayed in his mind for decades. Dan J. Marlowe (1914-1986), the author of The Name of the Game is Death, was widely praised in his day, but never achieved breakthrough status as a writer because he developed amnesia late in life. Marlowe, much admired as a writer by a real bank robber, Al Nussbaum, was urged by Nussbaum to try to regain his memory and to continue writing. Marlowe did so, but his best work was behind him, including this novel and its sequel, One Endless Hour, as well as such quirky, sharp-edged tales as The Vengeance Man, Strongarm, Never Live Twice and Death Deep Down.

Dan J. Marlowe (1914-1986), a master of the gun-and-fist suspense novel, has been called “hardest of the hard-boiled” by no less a figure than bestselling horror writer Stephen King. King dedicated his 2005 novel, The Colorado Kid, to Marlowe. In 1967, The New York Times' Anthony Boucher called Marlowe one of the country's top writers of original softcover suspense, numbering him with such authors as John D. MacDonald, Brett Halliday, Donald Hamilton, Richard Stark (a pseudonym for Donald Westlake), and Edward Aarons. Alone and in collaboration, Marlowe wrote more than 25 thrillers. Some of his best work featured an amoral bank robber, Earl Drake, who later morphed into a rebellious but effective secret agent.

You have subscribed to alerts for Dan Marlowe.

You have been added to Dan Marlowe's favorite list.

You can also sign-up to receive email notifications whenever Dan Marlowe releases a new book.