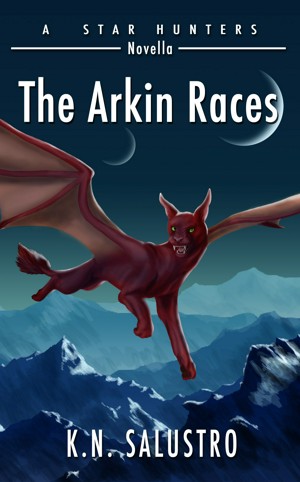 K.N. Salustro is a science fiction and fantasy writer from New Jersey who loves outer space, dragons, and good stories. When not at her day job, she runs an Etsy shop as a plush maker and makes art for her Society6 and Redbubble shops.

Her science fiction trilogy The Star Hunters has been nominated for the Cygnus Awards, with each book in the trilogy receiving its own accolades. Most recently, Light Runner (the third book of the series) received an honorable mention in the Global eBook Awards. Chasing Shadows, the first book in the trilogy and K.N. Salustro's debut novel, was also a quarter-finalist in the 2018 Screencraft Cinematic Book Contest, and won a silver medal in the 2019 Readers Favorite book awards in addition to receiving a 5-star review from the same platform.

K.N. Salustro has also written a spinoff novella called The Arkin Races, and is hard at work on her next book, which is a standalone fantasy mystery novel slated for publication in 2020.

You have subscribed to alerts for K.N. Salustro.