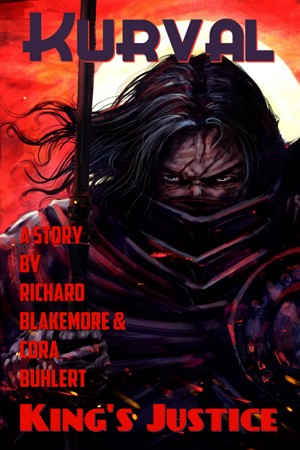 But Kurval’s reign is not an easy one. The people of Azakoria despise him as an uncouth barbarian, the nobles plot against him and assassination attempts are a frequent occurrence.

One day, a hooded assassin tries to stab Kurval during an audience. Kurval is shocked, when the assassin is revealed to be a young woman, Nelaira, daughter of a minor noble. But why would a girl of nineteen throw away her life on a futile assassination attempt?

As Kurval investigates Nelaira’s motives, he finds that he does not want to hang her. But he is king now and a king has to do his duty. Or does he?

This is a romantic novelette of 9000 words or approx. 30 print pages in the Kurval sword and sorcery series, but may be read as a standalone. Includes an introduction and afterword.
Available ebook formats: epub
Price: $0.99 USD
Buy Add to Library Give as a Gift
How gifting works
Create Widget
Tags: assassin sword and sorcery justice heroic fantasy novelette barbarian king pulp fantasy swashbuckling fantasy female execution gallows wedding
About Richard Blakemore

This pulpy sword and sorcery series chronicles the adventures of Kurval, barbarian turned King of Azakoria, and his struggles to be a good and just king to his people. So follow Kurval as he deals with treason, assassination attempts, monsters and the day to day troubles of kinghood.

You have subscribed to Smashwords Alerts new release notifications for Richard Blakemore.