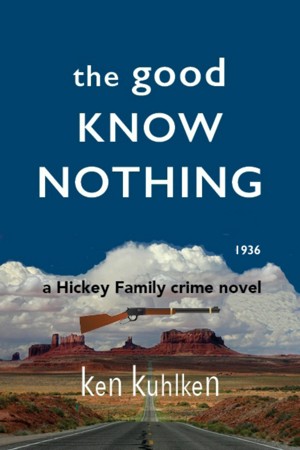 The Good Know Nothing

By Ken Kuhlken
While the Great Depression threatens to divide Tom's family, a popular novel delivers clues about his father's disappearance. To learn the truth, he needs to confront the author B Traven, a desperado alleged to be the Sundance Kid, and tycoon William Randolph Hearst.

“Kuhlken is an original, and in these days of cookie-cutter fiction, originality is something to be prized.” San Diego Union More
"Kuhlken works real people and events into the story (evangelist Aimee Semple McPherson and William Randolph Hearst, for example) and vividly anchors the reader in the story’s time and place. The social consciousness and the L.A. setting across decades make this series a fine choice for fans of Walter Mosley’s Easy Rawlins novels.” ~ Booklist

During the summer of 1936, destitute farmers from the Dust Bowl swarm into California, and an old friend brings L.A. police detective Tom Hickey a book manuscript, a clue to the mystery of his father Charlie’s long-ago disappearance. Tom chooses to risk losing his job and family to follow the lead, though even his oldest friend and mentor, fellow detective Leo Weiss, passionately opposes Tom’s decision.

In his relentless effort to find out what happened to Charlie, Tom lures the novelist B. Traven to Catalina Island and accuses him of homicide. Traven’s tale is that the Sundance Kid, having escaped from his reputed death in Bolivia, killed Charlie.

Tom crosses the desert to Tucson, pursuing the legendary outlaw. En route, he meets a young Dust Bowl refugee intent on avenging the enslavement of his sister by an L.A. cop on temporary border duty in Yuma. Tom frees the sister, delivers the boy’s revenge, and becomes a fugitive, wanted for felony assault by the L.A.P.D., his now former employer.

What he learns in Tucson sends Tom up against newspaper baron William Randolph Hearst. He hopes to enlist Leo before confronting Hearst. But Leo reveals the reason he’s tried to keep Tom from investigating: evidence that Tom’s father was hardly the gentle fellow his children believed.

Ken Kuhlken's stories have appeared in ESQUIRE and numerous other magazines, been honorably mentioned in BEST AMERICAN SHORT STORIES, and earned a National Endowment for the Arts Fellowship.

His novels include MIDHEAVEN, finalist for the Ernest Hemingway Award for best first fiction book, and the Hickey family mysteries: THE BIGGEST LIAR IN LOS ANGELES; THE GOOD KNOW NOTHING; THE VENUS DEAL; THE LOUD ADIOS, Private Eye Writers of America Press Best First PI Novel; THE ANGEL GANG; THE DO-RE-MI, finalist for the Shamus Best Novel Award; THE VAGABOND VIRGINS; THE VERY LEAST; and THE ANSWER TO EVERYTHING.

His five-book saga FOR AMERICA, is together a long, long novel and an incantation, a work of magic created to postpone the end of the world for at least a thousand years.

His work in progress is a YA mystery.

His WRITING AND THE SPIRIT advises artists seeking inspiration. He guides readers on a trip to the Kingdom of Heaven in READING BROTHER LAWRENCE.

Also, he reads a lot, plays golf, watches and coaches baseball and softball, teaches at Perelandra College, and hangs out with his daughter when she comes home from her excellent college back east.

The Hickey family novels, which begin with Tom Hickey's first investigation at age twenty-one and continues, over ten books, until his eighty-fifth year, are riveting stories of crime, heroics, and sacrificial love that also offer a vivid and panoramic vision of California as it transforms from a frontier to the most influential place on earth. Readers who accompany Tom and his extraordinary family on their adventures enrich their knowledge of America and the dark and bright recesses of the human heart.

“Tom Hickey is one of detective fiction’s most original and intriguing creations.” San Francisco Chronicle 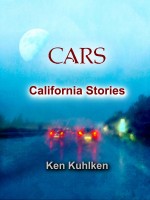 Reviews of The Good Know Nothing by Ken Kuhlken

You have subscribed to Smashwords Alerts new release notifications for Ken Kuhlken.