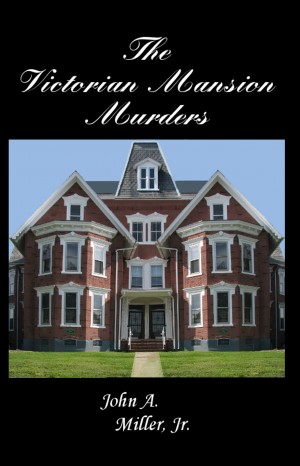 By John A. Miller, Jr.
Who wouldn’t want a cushy job as writing coach for teenage Mary Ann Markham, living with her rich grandfather in a Victorian mansion miles from anywhere? Art Parker signs on, only to have his first day marred by finding a housemaid’s body on Mary Ann’s bedroom floor. After finding another corpse, Art and Mary Ann try their hands as amateur sleuths only to find they might be the next victims. More
Art Parker, an unemployed journalist, answers an ad for employment, but the ad has few details about what the job entails or where he’ll be working. He gets the job after an evening interview at a huge Victorian-style mansion miles from anywhere. The owner, an incredibly wealthy old man, hires Art as live-in writing coach for his teenage granddaughter.

That sounds like an easy, relaxing sort of job, at least until the next afternoon when Art and Mary Ann—she’s the granddaughter—find the housemaid dead on the girl’s bedroom floor. An out-of-control sheriff, a bizarrely named lawyer, a beautiful librarian, a marvelous cook, and a huge valet/gardener clutter the landscape and add a pile of confusion while Art and Mary Ann decide to do some detecting on their own. What do they turn up? Another body.

John Miller, writing under his full name of John A. Miller, Jr., started writing novels back in late 1991 after working for many years in the mainframe computer and telecommunication fields. He had lived in southern Arizona so he knew the area well and set his first novel, Pima, in that area. Shortly after writing that novel he moved back to southern Arizona where he wrote five more novels in the Pima Series. He returned to his home area near Allentown, Pennsylvania in 1999 and continued to write, launching the Victorian Mansion Series with its nine novels.

Since retiring from their day jobs John and his wife have enjoyed visiting Cape Cod and The Bayside Resort in West Yarmouth, Massachusetts at least once every year, so with their permission he partially set there a standalone novel, The Bayside Murders.

Recently, after reading a number of cozy mysteries, John decided to launch a new series in that genre and named it Three-Zee for its main character, Zelanie Zephora Zook.

About the Series: Victorian Mansion

Arthur Parker is an out-of-work journalist who needs a job badly. He finds a dream job, or so he thinks, working as a writing coach for a teenage girl who lives in a huge Victorian mansion with her elderly and very wealthy grandfather. Art soon finds that dealing with Miss Mary Ann Markham isn’t the piece of cake he thought it would be as dead bodies keep cropping up all around them and make them persona non grata to the local sheriff and the police.

Reviews of The Victorian Mansion Murders by John A. Miller, Jr.

You have subscribed to Smashwords Alerts new release notifications for John A. Miller, Jr..

Would you like to favorite John A. Miller, Jr.?

You have been added to John A. Miller, Jr.'s favorite list.

You can also sign-up to receive email notifications whenever John A. Miller, Jr. releases a new book.