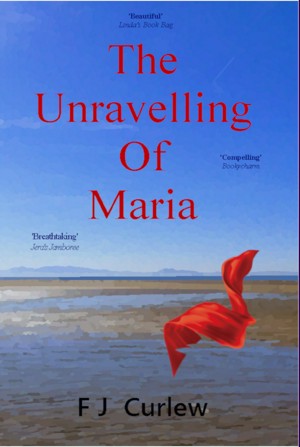 The Unravelling Of Maria

By F J Curlew
Lovers separated by the Iron Curtain.
Two women whose paths should never have crossed.
A remarkable journey that changes all of their lives. More
Maria's history is a lie. Washed up on the shores of Sweden in 1944, with no memory, she was forced to create her own. Nearly half a century later she still has no idea of her true identity.

Jaak fights for Estonia's independence refusing to accept the death of his fiancée Maarja, whose ship was sunk as she fled across the Baltic Sea to escape the Soviet invasion.

Angie knows exactly who she is. A drug addict, a waste of space. Life is just about getting by.
A chance meeting in Edinburgh's Cancer Centre is the catalyst for something very different.

Fiona dropped out of school aged fifteen, because being the consummate rebel, she hated it! After becoming a single parent she decided to return to education, graduating in 1996 with an honours degree in primary education. Ah, the irony!
As soon as she graduated she packed everything she owned into her Renault 11, including her daughter, two dogs and a cat, and headed off to Estonia to become an international school teacher.
After working abroad for fifteen years, predominantly in Eastern Europe, she returned to Scotland where she now lives with her rescue Springer Spaniel, Brockie, and Fingal the Portuguese rescue cat.

Reviews of The Unravelling Of Maria by F J Curlew

You have subscribed to alerts for F J Curlew.

You have been added to F J Curlew's favorite list.

You can also sign-up to receive email notifications whenever F J Curlew releases a new book.