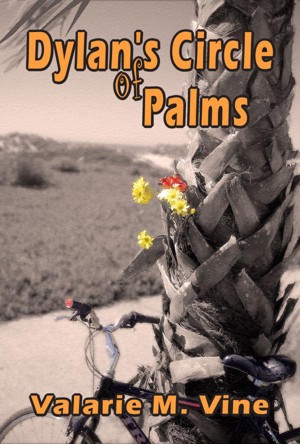 By Valarie Vine
Rated 5.00/5 based on 1 review
Dylan first discovered the beautiful Circle of Palms near the beach when he was 6 years old. His beloved grandmother would walk with him and teach him about the seasons and years of life by referring to the 88 palm trees that encircled the park as if they were friends at different stages in life. Dylan would never forget the Circle of Palms or the joy for life his grandmother so lovingly shared.
Download: epub mobi (Kindle) pdf more Online Reader
rtf lrf pdb txt
Price: Free! USD
Add to Library
Create Widget
Tags: love life beach growing up poem seasons grandmother aging kite bicycle playground flowers grandson palm trees sunsets windy day
About Valarie Vine

Yep, that’s me sitting on a rock in Griffith Park over there on the left. Pretty young to write a book, you say? Actually, the photo was taken a very long time ago, but that little girl with the over-sized boots and sunny smile will always be that age (no matter how many chronological years I accumulate). You see, once upon a time I was a “Little Orange” in the “Big Apple”------a little girl from sleepy Sherman Oaks, California who suddenly found herself (along with her brother, mother and father) living in the city that NEVER sleeps, New York City! That little girl pretty much ran wild and free through the streets of that great metropolis and had adventures that seem almost unbelievable in retrospect. Before the images fade of those times so long ago, as if in a dream that we try to hold onto upon awakening, I want to share her story with all of you.
----------------------------------

I have long been a reader with a particular fondness for coming-of age books (A Tree Grows in Brooklyn, To Kill a Mockingbird, and Catcher in the Rye being my personal favorites). I received a 3rd place writing award for an essay on fire prevention in 11th grade that consisted of a fireman holding a hose mounted on top of a block of wood with my name on it. It is still cherished as if it was an Oscar or Olympic medal because it was the first validation of my writing. From childhood I was engendered with a love for the classics of literature, music, and movies-----a shout out to Steinbeck, Tchaikovsky, and Ted Turner, respectively! For three decades I was blessed with living near the water's edge at Hollywood Beach, California and will forever keep the sights and sounds in my mind's eye: the plaintive foghorn, the scream of the gulls, the sunlight dancing on the waves, the pelicans flying in ancient and regal formation above the Pacific, and my labrador's affinity for running untold miles with me along the beach. Cherished memories forever. The foothills of the Sierra Nevadas, "Gold Country", is now my home in this final season of life where I walk cemeteries in every season, enjoying the jackrabbits in the spring, vigilant for snakes in summer, crunching through the beautiful leaves of autumn, and carefully stepping through the snow drifts that adorn the tombstones in winter. Culturally, historically,aesthetically, and spiritually, there is much to be learned in these hallowed grounds.

Reviews of Dylan's Circle of Palms by Valarie Vine

"Dillon's Circle of Palms," is a thoughtful story about the love of a grandson for his grandmother. The symbol of the circle of palm trees at the beach reflects their lives, and leave the reader reflecting on his or her own life. I'd give this story 5 stars based on it's message, and on the beautiful imagery that bring the story to life.

You have subscribed to alerts for Valarie Vine.

You have been added to Valarie Vine's favorite list.

You can also sign-up to receive email notifications whenever Valarie Vine releases a new book.