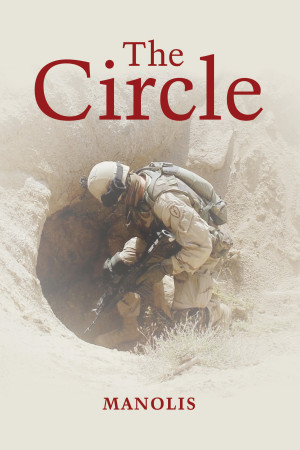 By Manolis
Circle is a political intrigue story that reflects recent world events and their aftermath. The characters are caught between circumstances of their cultures and politics of the times, players who are not what they portray: naïve and cunning, loyal and duplicitous, sentimental and appetite driven. More
Excerpt

Hakim sits on the windowsill, his gaze spreading to the other side of the road from his fourth-floor, 1000-square-foot, two bedroom apartment opposite Grandview Memorial Park. He has been renting this small place for the past three years, while trying to save for a down payment to buy a place of his own. The building is fairly new and his rent affordable. His Uncle Ibrahim always told him, "If you want to get ahead in life, make sure you buy real estate."

He feels very comfortable and has decorated it well. He is happy with the job he's had for the last one-and-a-half years with a small computer company. A shareholder earning good money, he is able to afford a two-year-old, red Honda Accord, his pride and joy. He also prides himself on the sensible way he leads his life.

Hakim comes from a country devastated by war and knows he will have to work hard for a long time to establish himself in his new country. Jennifer, his girlfriend of eight months, has helped him decorate his apartment, in selecting carpets, furniture, bedding, and much more. Although an immense help, Hakim sometimes thinks she goes too far, crowding his space and insisting her view to be correct every time.

Jennifer is twenty-five, a beautiful brunette with light green eyes and fair complexion. She has grown up in Los Angeles, has a degree in economics, and works for a small finance company. She earns enough to live on her own, although she still lives with her parents in their house off Glendale toward South Brand Blvd. in Pasadena.
Available ebook formats: epub mobi pdf rtf lrf pdb txt html
First 20% Sample: mobi (Kindle) lrf pdb Online Reader
Price: $4.50 USD
Buy Add to Library Give as a Gift
How gifting works
Create Widget
Tags: terrorism war iraq iraq war baghdad bombing destruction sunni triangle
About Manolis

Manolis was born in the small village Kolibari west of Chania on the Greek island of Crete in 1947. At a young age his family moved first to Thessaloniki and then to Athens where he was educated, achieving a Bachelor's Degree in Political Science at Panteion Supreme School of Athens. He served in the armed forces for two years, and emigrated to Vancouver in 1973, where he worked in several different jobs over the years.

He attended Simon Fraser University for a year, taking English Literature in a non-degree program. He has written three novels, a large number of collections of poetry, which are slowly appearing as published works, various articles and short stories in Greek as well as in English. After working as an iron worker, train labourer, taxi driver, and stock broker, he now lives in White Rock where he spends his time writing, gardening, and traveling.

Towards the end of 2006 he founded Libros Libertad, an unorthodox and independent publishing company in Surrey, BC, with the goal of publishing literary books.

Reviews of The Circle by Manolis

You have subscribed to alerts for Manolis.

You can also sign-up to receive email notifications whenever Manolis releases a new book.