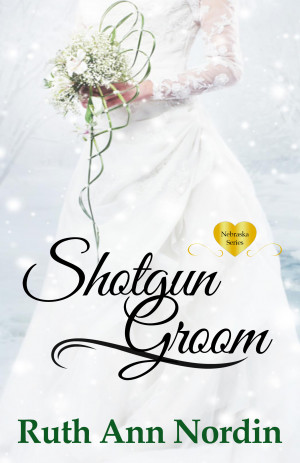 Rated 4.91/5 based on 11 reviews
When Joel Larson goes out to check on a sick child, the last thing he expects is a shotgun and a marriage proposal he can't refuse! More
April Edwards, a young widow, is content to manage a farm with her fourteen-year-old brother and a one-year-old daughter. Nothing, after all, could be worse than being married to her deceased husband. Nothing, that is, until her unscrupulous brother-in-law decides to marry her. With no other recourse, April and her brother concoct a plan--one that involves the unsuspecting doctor’s assistant, Joel Larson.

Joel Larson doesn't want to be married. In fact, he’s perfectly happy with things the way they are, but when he’s sent to check on April’s sick child, things take an unexpected turn for the worse. In one instant, he finds a gun and a mandate to marry April staring him in the face. Can a marriage that begins with a shotgun be just the thing Joel needs or has April just confined herself to another miserable marriage?
Available ebook formats: epub mobi lrf pdb
First 20% Sample: epub mobi (Kindle) lrf more
pdb
Price: $2.99 USD
Buy Add to Library Give as a Gift
How gifting works
Create Widget
Tags: romance love suspense christmas sex child widow forced marriage shotgun wedding virgin hero unwilling groom shotgun groom
About Ruth Ann Nordin

About the Series: Nebraska Series

Follow the Larson family and their friends as they find their way to a happily ever after with their true love.

Nice romance, on the sweet side.

I wasn't a fan of Joel at the very beginning because he spent his time whining but OMG! By the end of the book I wanted more! LOL... you learn to love each and every character in Ruth Ann Nordin's books. Loved the book! Maybe a story for Sep? Would love to know how he turned out...

This book is so amazing!! I want to read more and more of Miss Ruth's books. Thank you for writing great books again and again. I'm waiting for more books! :)

I don't think anyone but Ruth Ann could come up with a story like this one. Great Job. Loved it.

Great story again from this author.

Sooo funny!!! All the Larsons are a funny bunch, but Joel story beats the funny bone. Thanks Ruth!

I really liked this book. I had been waiting what seemed like forever for this book and read it in no time. Awesome

I really like the book. It was a great book to read just like all of Ruth Ann's books.

Shotgun Groom by Ruth Ann Nordin
Nebraska Series Book 6
Ruth does it again! Another exciting book in her Nebraska series. This time it is pesky baby brother Joel's turn. In A Bride for Tom we meet Joel. He is always picking on Tom and avoiding chores whenever he can. And full of mischief as well. This time the tables are turned though. Joel has been working with the local doctor so he can one day be one as well. Farm work was never his forte. A routine visit to do a follow up on young Nora Edwards changes Joel's life, and he did not consider it a good change. Being held at gunpoint and told he would marry Nora's mother, April, was not in Joel's plans. Young Sep did not care what Joel thought. With some unexpected help for April, Joel finds himself married, when he was determined to stay a bachelor.

April was not sad to be a widow. Harvey had been a cruel man and continued living quite an immoral life. When his brother Lou comes into her home with intentions of staying around, she is willing to do anything to stay safe. When her fourteen year old brother comes up with a plan, April don't see any other way...even if she don't like it. Thus the need to force Joel Larson into marriage. Quite a disagreeable young man but there were no other single men who happen to come into her home when she needed a husband.

As usual Ruth's stories are full of humor and love. I enjoyed seeing all the Larson's from the previous books and getting to know a few of them better. There is the danger side in the story as well. Lou is still on the loose, there is a locked bedroom that April will not let Joel in nor will she talk about it, Joel is not going to just give in and be a happily married man, and of course Tom is going to enjoy every minute he can if he thinks Joel is suffering.