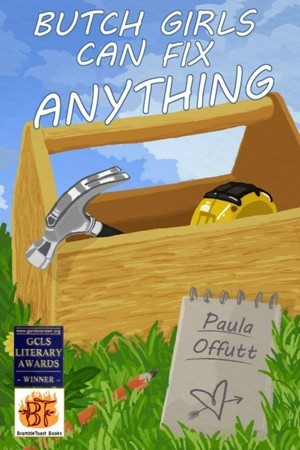 Butch Girls Can Fix Anything

By Paula Offutt
Kelly Walker and Grace Owens meet and discover they like each other enough to take a risk on love. More
Kelly Walker is known around town as someone who can repair just about anything house related. That’s true, except for the hole in her life left by the death of her lover, Anna. Her fix-it business provides the perfect hideout as she deals with other people’s problems instead of focusing on her own shattered life.

Grace Owens, single mother, is determined to stand on her own two feet and make a fresh start for herself and her nine-year-old daughter, Lucy. She’s promised her daughter they are here to stay. Grace is determined to keep that promise. Lucy has a goal of her own: she wants to master her math homework, and that’s a hard task with a mother who doesn’t understand division.

The three meet under a leaky kitchen ceiling. What each has to give, the others need. They must learn when to take risks and when to trust each other. Together, can they find the tools that will allow them to fix what most needs to be rebuilt?
Available ebook formats: epub pdf lrf pdb txt html
First 20% Sample: lrf pdb Online Reader
Price: $8.50 USD
Buy Add to Library Give as a Gift
How gifting works
Create Widget
Tags: lgbt lesbian lesbian romance lesbian fiction butch lesbian lgbt romacne
About Paula Offutt

Paula Offutt lives in the mountains of western North Carolina. She and her partner share an old house with dogs, cats, and a pot smoking moth in the attic. Paula believes that humor is what makes the world go 'round, although love is a close second. She surrounds herself with as much of both as she can.

Visit her website for information on current and past projects she is actively working on or, quite possibly, actively avoiding. https://paulaoffutt.com

Reviews of Butch Girls Can Fix Anything by Paula Offutt

You have subscribed to alerts for Paula Offutt.

You have been added to Paula Offutt's favorite list.

You can also sign-up to receive email notifications whenever Paula Offutt releases a new book.