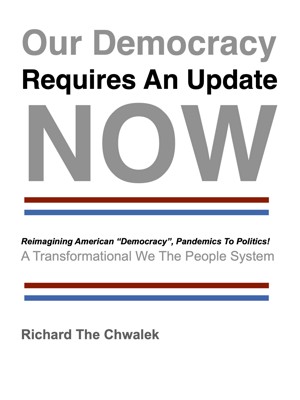 Our Democracy Requires An Update Now

By Richard The Chwalek
Our democracy is being challenged in multiple ways. We cannot continue in this slipshod and haphazard manner. Many books provide great ideas about changing the system. This book provides a system that actually implements the ideas. Time to update our democracy for the 21st century, and beyond, with The WTP System! More
Everyday we hear of many great ideas about the way things should be. After those words are expressed, progress is stopped by an array of disinterested political forces. The functions of government are bogged down in trivial fights for turf. Societal solutions never see the light of day, politics abandons them. The powerful dissociate from the masses, and do not see, or respect overall society. Super wealthy individuals become super wealthy because they were not focused on the entire people, only their limited customer base. Politicians assent to those limits. We require more than great ideas to compete with these indifferent and amoral yet powerful forces.
…
In the three sections of my presentation, I explain my thinking and research on why the system proposed is the way forward. Second, in the System Section, I outline the new system with background on the reasoning for, and value of, each element as well as present various system details. The citizen and worker movement that will make the system a reality ends the second section. Lastly, I conclude by presenting how to mentally contextualize the concept, and the way forward. …
Available ebook formats: epub mobi pdf lrf pdb txt html
You set the price! USD
Buy Add to Library Give as a Gift
How gifting works
Create Widget
Tags: politics racism socialism capitalism economics sexism polarization new democracy
About Richard The Chwalek

After twenty years of marketing, I have begun to focus on more profound issues in my writing. I began life in South Bend, Indiana. Then we moved to Centerville, Iowa when I was in the middle of 6th grade after my father was let go for whistleblowing on the management at Bendix. Went to school at NEMSU in Kirksville, Missouri, but dropped out to attend Brown Institute in Minneapolis for radio. Worked at KORN in Mitchell, South Dakota, York Nebraska radio station, then back to Minnesota, Willmar, where I met my wife, Susan. Four years of radio in first round; about three more after… We moved to Minneapolis in 1988, where I did standup for four years; got to know a few of the comics who went on to do MST3X. Worked at Davanni's restaurants to pay bills. Went back to school, did a little more radio in St. Cloud, now live outside of Monticello a few miles, with Susan, and our two adult daughters are getting on with their lives. Love to run in Lake Maria State Park couple times a week. On local planning and zoning commission. Economics, and racism are the two big topics I like to write about.

Learn more about Richard The Chwalek

You have subscribed to alerts for Richard The Chwalek.

You have been added to Richard The Chwalek's favorite list.

You can also sign-up to receive email notifications whenever Richard The Chwalek releases a new book.