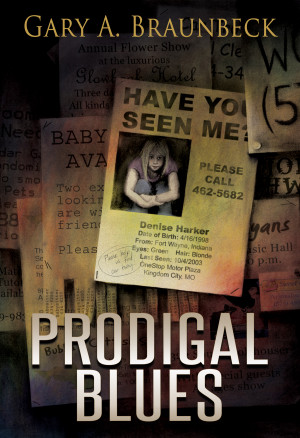 By Gary Braunbeck
Rated 4.00/5 based on 1 review
children have suffered, but how they eventually learned to fight back and how they discovered that Grendel and his practices are at the center of a very complex network catering to those who tastes run toward the molestation and mutilation of children. More
From award-winning author Gary A. Braunbeck comes Prodigal Blues, his first foray into non-supernatural horror.

After he finds himself stranded at a truck stop in Missouri, Mark Sieber gets one of the biggest shocks of his life when he recognizes the face of a little girl on a Missing poster as belonging to the same little girl he saw only a few minutes before. Looking around for some sign of her, he comes back to his table in the restaurant to find the little sitting there, waiting for him.

"I'm sorry, mister," is all she seems capable of saying.

As the police and media begin to converge on the truck stop, Mark retreats back to his hotel room to call his wife and let her know what's going on, only to be taken hostage by the same people who released the little girl. But his abductors are little more than children themselves.

Ranging in ages from 12 to 19, Mark's abductors are in the process of escaping from a sadistic pedophile known to them only as "Grendel" a man whose practices include torture and mutilation specifically, mutilation of the face.

Mark's abductors have all been mutilated by Grendel who may be very close behind them and need someone with a "normal face" to help them carry out their plan for justice and returning home.

For the next few days, Mark will come to understand not only the inhuman horror that these children have suffered, but how they eventually learned to fight back and how they discovered that Grendel and his practices are at the center of a very complex network catering to those who tastes run toward the molestation and mutilation of children.

Prodigal Blues is perhaps Braunbeck's most suspenseful and emotionally powerful work to date; a story of suffering, depravity, redemption, and in the end the individual's compassion for his or her fellow human beings that can lead some people to finding reserves of courage and determination they never thought they possessed.

A funny thing happened when I started collecting Gary Braunbeck novels. In 2006 I missed one. I mean, I’d heard the title several times over the years, but for some reason, it always seemed to me like an older novel, like something published before I’d started reading Braunbeck, and with that in mind I figured it was going to be one of those collector’s editions that would cost as much as my house payment anyway, so I never sought it out. Then I found the ebook on smash words for only $3.99, so naturally I snatched it up. Only later did I realize this book was only a few years old.

PRODIGAL BLUES isn’t technically a Cedar Hill story, although the main character Mark does live in Cedar Hill. In this story, he’s in southern Missouri, on his way back from Kansas to sign some papers for his sister regarding their grandmother’s inheritance. On the drive back, the loaner car Mark got from his brother-in-law breaks down and a tow truck gives him a ride into town where he gets a motel room for the night, then goes across the street for dinner. While in the restaurant, Mark notices a particular VW van in the parking lot, pulling a silver Airstream trailer. He’d spotted the car a few times on the highway, noticing the little girl inside it who waved to him.

While waiting for his food, Mark looks around the restaurant and notices that same little girl’s face, only this time it’s staring out at him from a MISSING poster. At first he wonders if this is a set-up, a test to see how much people really pay attention to the faces on those posters by having the little girl featured on it actually inside the restaurant. Then he goes back to his booth and finds the girl sitting there, waiting for him.

There’s the expected hubbub with the police and news involved, but Mark escapes the scene unnoticed and goes back to his room. The restaurant owner says she’ll have his food sent over to him. Back in his room, Mark calls his wife, but then when he goes to answer the knock at the door telling him his food has arrived, he has only a second to realize this isn’t a waitress, and the tazer she zaps him with isn’t dinner.

When Mark wakes up, he realizes he’s been taken captive. Eventually he learns his captors are themselves escapees from their own captor, only theirs was a sadistic pedophile who has permanently scarred them in various ways, removed body parts, flayed their skin, burnt them, just about any form of torture you can think of, these kids have had it done to them.

Previous to the beginning of the novel, the kids finally, after several years, have made their escape. Now they need someone to help deliver them home without a lot of media attention or authorities. See, the guy who held them captive, Grendel, operated within a particular circle, and this circle included men in high places, in professions it just wasn’t safe to turn yourself over to. So they need a cover, someone they know isn’t connected to Grendel or his customers who can help get them back to their families.

I had a bit of trouble following the logic of the story, however. With the quickest route being a straight line, why bother wandering the highways looking for a random stranger to take the kids home when the kids themselves were driving the van, had directions and everything to their homes, plenty of money to get them there. So why bother kidnapping someone else to assist them? Because he looked normal and wouldn’t arouse suspicion? How long could it possibly take to get everyone home? I mean the novel takes place in only two days.

When the first kid is delivered to his home, Christopher, the oldest and leader of the group, holds a gun on Mark and forces him to call the boy’s parents, posing as a US Marshall, to hand over their son. As far as I could tell, the only thing Mark really did was wake them up and tell them there’s a network of perverts out there, we have a few more kids to get home so don’t go to the news or anything just yet.

But couldn’t Christopher have done that? I mean it doesn’t seem like any chore to have the kids themselves deliver the kids home. In fact, if they’d all operated as a team, let the parents see what Grendel had done to them, and then Christopher had said “I need to get the rest of these guys home, and Grendel has a network of perverts out there, so wait a day or so before you call the news, okay?” . . . wouldn’t that have been just as effective? And saved time.

I just didn’t get the logic of the novel. I enjoyed it, don’t get me wrong; the writing was all Braunbeck, and that’s good stuff, and the characters were fully developed and interacted well and the story flew by, but looking at it objectively, it just seemed a lot of time was wasted recruiting Mark when they could have just done it themselves. I don’t know, maybe I’m missing something here.

This is the first non-supernatural horror novel I’ve read from Braunbeck, and he pulled it off nicely. The subject alone is something that no one could argue is the most horrible situation imaginable, and nary a ghost was needed to pull it off. Braunbeck has a knack for describing some seriously messed up stuff, and his eye for what details to show, what details to imply, is spot on. He perfectly conveys the hell the kids lived in without getting gratuitous in his descriptions, and of course the stuff he doesn’t show just makes the readers’ minds work overtime and the stuff we come with ourselves is bad enough and that in turn makes our connection to and empathy with the characters all the stronger.

While I had trouble following just why they needed Mark’s help, Braunbeck drew me in with his prose, his story and his characters. I’ve yet to read a Braunbeck story I didn’t like, and PRODIGAL BLUES continues that tradition, and is just further proof, for me, why it is I continue to sing his praises.

You have subscribed to Smashwords Alerts new release notifications for Gary Braunbeck.

You have been added to Gary Braunbeck's favorite list.

You can also sign-up to receive email notifications whenever Gary Braunbeck releases a new book.