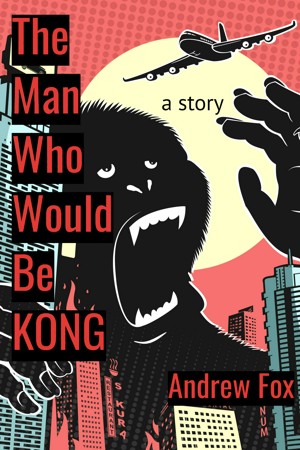 The Man Who Would Be Kong: a Story

Andrew Fox was born in Miami Beach in 1964. He has been a fan of science fiction and horror since he saw Godzilla and friends romp through Destroy All Monsters at the drive-in theater at the age of three. In 1994, he joined award-winning science fiction author George Alec Effinger's monthly writing workshop group in New Orleans, where Andrew lived for more than two decades. Since 2009, he has lived in Northern Virginia with his wife and three boys, where he works for a federal law enforcement agency.

His first novel, Fat White Vampire Blues, published by Ballantine Books in 2003, was widely described as "Anne Rice meets A Confederacy of Dunces." It won the Ruthven Award for Best Vampire Fiction of 2003. Its sequel, Bride of the Fat White Vampire, was published in 2004. His third novel, The Good Humor Man, or, Calorie 3501, was published by Tachyon Publications in April, 2009. It was selected by Booklist as one of the Ten Best SF/Fantasy Novels of the Year and was first runner up for the Darrell Award, presented for best SF or fantasy novel written by a Mid-South author or set in the Mid-South. In 2006, he was one of the three winners of the Moment Magazine-Karma Foundation Short Fiction Award.

Andrew is an outspoken advocate for freedom of speech and thought in science fiction. MonstraCity Press is publishing two volumes of short fiction that, in the tradition of Harlan Ellison's groundbreaking anthologies Dangerous Visions and Again, Dangerous Visions, push the boundaries of what is considered taboo in science fiction. The first volume, Hazardous Imaginings: The Mondo Book of Politically Incorrect Science Fiction, includes two of Andrew's short novels and three of his stories. The second volume, Again, Hazardous Imaginings, features 14 stories by writers from all over the world. Science fiction is not a safe space!

Andrew's other jobs have been varied. He has worked at a children's psychiatric center, managed a statewide supplemental nutrition program for senior citizens, taught musical theater and improv to children, and sold Saturn cars and trucks (just before the automotive division was abolished by General Motors). He has also been a mime (in his younger days) and produced a multi-sensory interactive play for blind children in New Orleans.

His oddest association is that he attended high school with Jeff Zucker, who would go on to become the president of NBC/Universal and then of CNN. Andrew's impressions of Zucker can be found in an article he wrote for Tablet Magazine, "Bullies, Inc." It can be found at: https://www.tabletmag.com/sections/arts-letters/articles/jeff-zucker-donald-trump

Andrew Fox's website and blog can be found at:
www.fantasticalandrewfox.com

The latest information about MonstraCity Press books can be found at:
www.monstracitypress.com

Reviews of The Man Who Would Be Kong: a Story by Andrew Fox

You have subscribed to Smashwords Alerts new release notifications for Andrew Fox.