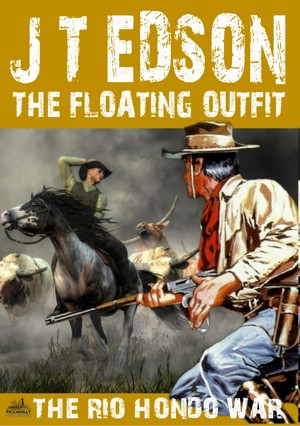 J.T. Edson brings to life the fierce and often bloody struggles of untamed West. His colorful characters are linked together by the binding power of the spirit of adventure -- and hard work -- that eventually won the West. With more than 25 million copies of his novels in print, J.T. Edson has proven to be one of the finest craftsmen of Western storytelling in our time.

About the Series: The Floating Outfit

J.T. Edson describes a Floating Outfit as a group of cowhands who travel the outer sections of ranchland dealing with problems that occur far from the main house. Dusty Fog, The Ysabel Kid and Mark Counter make up the Floating Outfit at the OD Connected Ranch, and they travel far and wide punching cows and righting wrongs in the old West.

Also in Series: The Floating Outfit

Reviews of The Floating Outfit 55: The Rio Hondo War by J.T. Edson

You have subscribed to alerts for J.T. Edson.

You have been added to J.T. Edson's favorite list.

You can also sign-up to receive email notifications whenever J.T. Edson releases a new book.