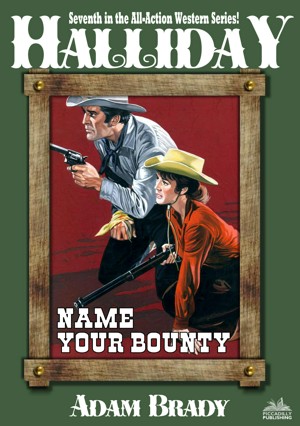 Adam Brady was one of many pseudonyms used by prolific Australian writer Desmond Robert Dunn (6 November 1929-5 May 2003). In addition to four crime novels published under his own name, Des was a tireless western writer whose career spanned more than fifty years and well in excess of 400 oaters. These quick-moving, vivid and always compelling stories appeared under such pen-names as Shad Denver, Gunn Halliday, Brett Iverson, Matt Cregan, Walt Renwick and Morgan Culp. He is also said to have written a number of the ever-popular Larry Kent P.I. novels, but at this late date author attribution is almost impossible. He married and divorced twice, and had three children. He died at the age of 73 in Brisbane, Queensland.

About the Series: Halliday

Buck Halliday was a sudden man with a gun.
Halliday had killed men before, but he wasn't a killer for hire.
The settling of trouble was how he made his living.
His .44 was his way of settling matters...

Reviews of Halliday 7: Name Your Bounty by Adam Brady

You have subscribed to alerts for Adam Brady.

You have been added to Adam Brady's favorite list.

You can also sign-up to receive email notifications whenever Adam Brady releases a new book.