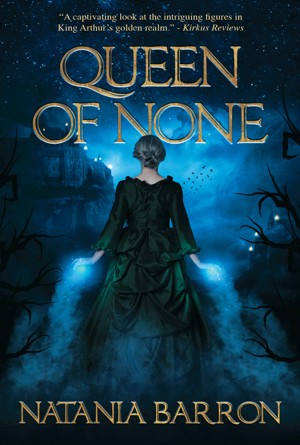 By Natania Barron
Forced to marry an abusive man she does not love because of Merlin's prophecy, Anna Pendragon returns to King Arthur's court seeking vengeance. When a latent, dark power awakens within her, she must bargain her strength, her family, and one true love against her ambition and thirst for revenge. More
When Anna Pendragon was born, Merlin prophesied: "Through all the ages, and in the hearts of men, you will be forgotten."

Married at twelve, and a mother soon after, Anna - the famed King Arthur's sister - did not live a young life full of promise, myth, and legend. She bore three strong sons and delivered the kingdom of Orkney to her brother by way of her marriage. She did as she was asked, invisible and useful for her name, her status, her dowry, and her womb.

Twenty years after she left her home, Anna returns to Carelon at Arthur's bidding, carrying the crown of her now-dead husband, Lot of Orkney. Past her prime and confined to the castle itself, she finds herself yet again a pawn in greater machinations and seemingly helpless to do anything about it. Anna must once again face the demons of her childhood: her sister Morgen, Elaine, and Morgause; Merlin and his scheming Avillion priests; and Bedevere, the man she once loved. To say nothing of new court visitors, like Lanceloch, or the trouble concerning her own sons.

Carelon, and all of Braetan, is changing, though, and Anna must change along with it. New threats, inside and out, lurk in the shadows, and a strange power begins to awaken in her. As she learns to reconcile her dark gift, and struggles to keep the power to herself, she must bargain her own strength, and family, against her ambition and thirst for revenge.
Available ebook formats: epub
Price: $9.99 USD
Buy Add to Library Give as a Gift
How gifting works
Create Widget
Tags: romance fantasy merlin king arthur medieval circe excalibur arhuriana
About Natania Barron

Natania Barron believes in monsters and hopes you do, too. She’s the author of dozens of short stories, a fistful of novellas, and a few novels. All of these works contain monsters of one variety of another, but not all of them wear monstrous skins.

When not traveling through imagined worlds, she lives in North Carolina with her family, where she traipses through the forest on a regular basis, bakes incessantly, drinks an inordinate amount of tea, and dreams of someday owning a haunted house of her own.

Her work has appeared in Weird Tales, EscapePod, Steampunk Tales, Crossed Genres, Bull Spec, and various anthologies. Her longer works run the gamut from Edwardian urban fantasy to tales of the rock and roll world. She is also the founder of The Outer Alliance, a group dedicated to queer advocacy in speculative fiction. She’s also an outspoken advocate for mental health rights, particularly pertaining to her son Liam, who has autism.

Natania holds a BA in English/Writing from Loyola University Maryland and an MA in English with a concentration in medieval literature from the University of North Carolina at Greensboro. During the day she works as a Global Marketing Director in clinical research. This amazing job allows her to do her other favorite thing: travel!

As a mental health activist, especially regarding adolescent care, Natania has drawn nationwide attention for her writing, including mainstream news and television appearances. Inspired by her son Liam’s struggle through the school system as a child with high functioning autism and a variety of other challenges, she is an outspoken advocate. You can read more about her story at Medium.

You have subscribed to alerts for Natania Barron.

You have been added to Natania Barron's favorite list.

You can also sign-up to receive email notifications whenever Natania Barron releases a new book.