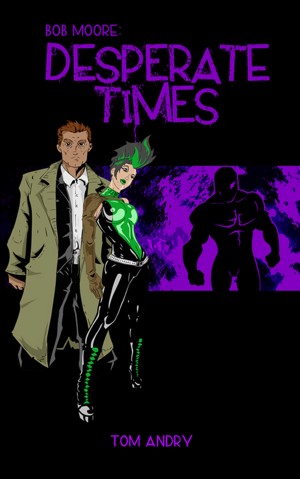 Combining a traditional comic book style setting with a noir tone, Bob Moore: Desperate Times marries the action of superhero stories with deep and thought-provoking supporting characters. Filled with action, intrigue, and emotional depth, readers from all walks of life and backgrounds will find something with which to connect. The non-stop action and monumentally high stakes mean that these are desperate times for Bob as he must use all of his skills just to survive and protect the people he cares about most.
Available ebook formats: epub mobi pdf rtf lrf pdb txt html
First 50% Sample: epub mobi (Kindle) lrf more Online Reader
pdb
Price: $3.99 USD
Buy Add to Library Give as a Gift
How gifting works
Create Widget
Tags: comic fiction detective noir superhero telepath super villian noir science fiction comic adventure
About Tom Andry

Tom Andry is the Associate Editor of Audioholics.com and host of the AV Rant podcast. He's been writing mostly reviews but has lately returned to his prose roots. He has written many unpublished short stories, poems, and a few screenplays that may still be produced. He's the father of three boys affectionately nicknamed Punkalicious, Captain Evil, and Neo. He's happily married and currently resides in Perth, Australia. His background is in drama, creative writing, and research psychology which basically means his kids are in for a pretty rough time. His wife, Tanel, doesn't have it so easy either.

More great stuff involving the gumshoe in a superhero's world. Best things about it: believable characters & dry humour. I too look forward to more.

Very well written and interesting. Darker than the first one, i hope life will bring more happiness for Bob in the next book.
I'm looking forward to read more about him, hopefully soon.

You have subscribed to Smashwords Alerts new release notifications for Tom Andry.

You have been added to Tom Andry's favorite list.

You can also sign-up to receive email notifications whenever Tom Andry releases a new book.