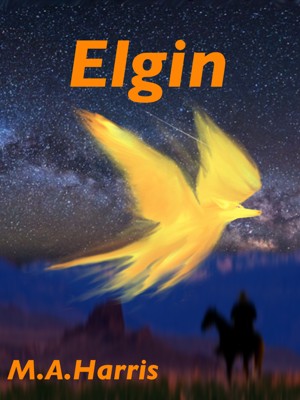 By M.A. Harris
Rated 4.00/5 based on 1 reviews
An adventure set in a world at a slight angle from ours. Modern day Cowboy Elgin Chalmer’s finds that man eating lizard girls, spider monsters, Were’s and Vamp’s are far harder to deal with than steers.

This isn’t SteamPunk or UrbanFantasy it’s QuantPunk SciFi and first of many stories mixing ‘quantum’ scifi and fantasy.

This is a ‘cleaned up’ edition of my NaNoWriMo Submission Nov ‘12 More
Elgin’s old life was nothing much, Beauty Wyoming was as beautiful and remote as one could get, a town of cowboys and Indians, in a setting of rangeland, mountains and lakes. Elgin Chalmer’s was a cowboy and a part breed black-sheep slacker living with his huge Siamese cat Humph in a forty year old trailer. Life was OK for Elgin, he didn’t want much and didn’t get any more. Then one raw snowy day he made the mistake of heading into the mountains with a gut full of whisky and a head muddled by rotten drugs...death came easily considering.

And that was when things started to get really messy. A world of alien dangers and powers were waking up after two thousand years in hibernation and humanity’s protector needed a new helper. Now Elgin found himself dealing with flesh eating lizard girls, ancient spider monsters, along with werewolves and vampires who didn’t always play by the rules. And on top of it all he had to get used to eating sharks, raw and still fighting.

But now of course he had a chance to meet up with the cool girls; The Wiccan proprietor of the local New-Age gift shop, with an ancient Indian totem in her basement, the pistol packing deputy with a secret, and the beautiful Russian spy with a heart of gold and the killer instincts of a she wolf.

Some words of explanation. First, the National Novel Writing Month or NaNoWriMo, (www.nanowrimo.org) is run by a tiny nonprofit called he Office of Letters and Light, an organization that promotes writing in all its glorious permutations among the young, young at heart, and not so young (among whom I fall in the right hand distribution tail these days.) I wrote the first 60,000 words or so of Elgin in November 2011 and finished the remaining half by February 2012, since then, among many other things, my father and I have been editing so I can submit it for publication at Smashwords.

Second, this book isn’t SteamPunk, UrbanFantasy, Fantasy, I like to think of it as a type of SciFi, what I call Quantum Punk. Using the possibilities our quantum universe opens up to the imagination as a basis for something that tries to be Science Fiction with a very strong tint of UrbanFantasy and SteamPunk, I hope you enjoy.

Price: $1.99 USD
Buy Add to Library Give as a Gift
How gifting works
Create Widget

I downloaded this as a free read, and am impressed enough to try more of his work. The writing style is as laid back as the main character Elgin (although the punctuation breaks down at times - commas replacing full stops!). The storyline is original, and goes off in entirely unexpected directions. Highly enjoyable